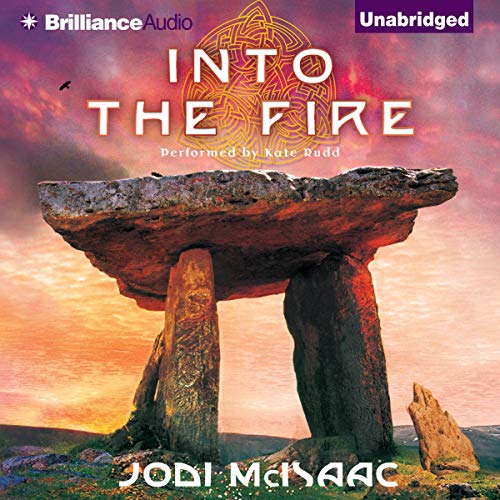 Cedar McLeod would like nothing more than to return to Tír na nÓg, help rebuild the mythical kingdom, and start a new life for herself and her daughter, Eden. But peace isn’t what Cedar finds after being reunited with her little girl.

Nuala - who kidnapped and terrorized Eden in her previous bid for power - has returned and is making a persuasive claim for the vacant throne. The devastation such a ruler would bring upon both the kingdom and the human world is unthinkable. With no one else to stake a convincing counter-claim, Cedar steps forward...but first she must prove her worth beyond a doubt.

Her opportunity comes when she is charged with finding an ancient treasure, the Stone of Destiny, and returning it to its rightful home. It is a quest that will lead her to question her beliefs, and push her loyalties to their limits. If she succeeds, Cedar could grant her new world and her new family a chance to flourish again. If not . . . destruction may be the only path ahead.Into the Fire, the second book in the Thin Veil series, is a captivating blend of Celtic myth, mystery, and adventure that delves deeper into the ancient world first explored in Through the Door.

What listeners say about Into the Fire

I love this series. The story is fast moving. It was hard for me to stop listening I did my chores carrying my Kindle every where as I listened. I love the people and would recommend anyone who loves Fantasy read these books.

I love this series. I listened to each book right in a row, and that is something I cannot do with most series.

I have never experienced a book series based around Irish folklore and I have loved every second of it. Continue this series! You'll thank yourself for it!

A little predictable but a great story line that kept u coming back for more action and adventure. Loved it

I enjoyed this second book of the trilogy as much as the first! In this book Cedar is on a quest to find a long missing treasure of the Celtic gods. It's the story of the quest and the trials and tribulations that the quest entails. The narrator again does a fantastic job. She has voices for the multiple characters and does them well. I was impressed by her Irish accents. All in all an enjoyable listen. I'd give the story more stars, but I'm trying to get my stats aligned so audible will make suggestion to my true epic fantasy taste.

The second book in the series has also kept us on the edge of our seats. Just downloaded the last in the series.