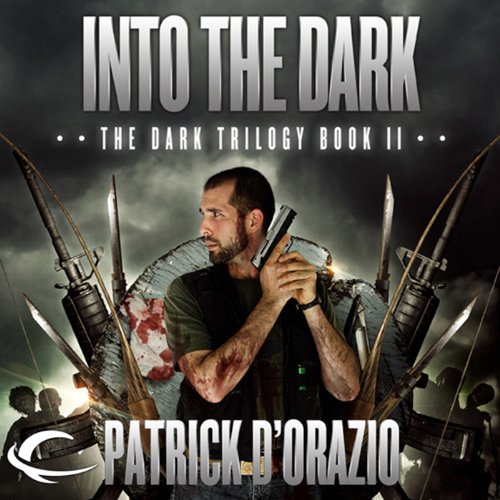 By: Patrick D'Orazio
Narrated by: Jim Cooper
Free with a 30-day trial

Six weeks ago, the mysterious virus came out of nowhere and engulfed the world. Everyone infected seemed to die...then rise again. Jeff Blaine did his best to hold his family together and to protect them from the horrors scratching at their door, but in the end, they were ripped away from him like everything else that ever mattered. Lost and alone, Jeff decided his only option was to destroy as many of the monsters that stole his life away before they destroy him as well. But when he discovers Megan, George, and Jason, three other survivors not interested in giving up just yet, he reluctantly accepts that there might still be a reason to fight and live to see another day.

Traveling through the blasted landscape their world has become, the quartet discovers that the living dead aren't the only danger with which they must cope. Even other survivors who promise safety and security from the hordes of ghouls roaming the wastelands will test loyalties and their faith in humankind. Jeff and his small band of newfound friends must forge a semblance of life in the newly blighted world. And they will have only the light of their own humanity by which to navigate as everything around them descends into the dark.

What listeners say about Into the Dark

michael's compound is an interesting setup. i won't give it away, but i haven't seen that done before in any of the other zombie books. actually, it's a pretty good concept AND IF there's ever a real zombie outbreak, i'd consider employing that tactic. LOL

this book is mostly about group dynamics and interpersonal conflict. as such, it is well done!

michael's group is pretty small. he's got 2 redneck henchman, a psychopathic girlfriend, 2 teen boys who haven't seen any real action, lydia, an older yet wise woman, who looks after the 2 kids, and ben. ben is an interesting character. he doesn't speak much, but when he does, even michael listens. ben is michael's finder- the only one who lave the compound to find things.

the author does a good job building tension b/ween the 2 groups and then stretching it until it breaks. although there's not as much zombie action as in the 1st book, there's still a lot of passive aggression b/ween the characters to keep you listening.

actually, this is one of the better zombie books i've listened to when it comes to group dynamics and personal scheming. the conflicts are believable. they don't seemed to be forced for conflict sake.

the zombie action picks back up about 1/2 through the book when a group of mixed survivors heads into town on a supply hunt.

one thing i forgot to mention in my 1st review is that there "seems" to be something else going on. in the 1st book and in this book, some of the survivors seem to see a shadow running around. they write it off as a trick of the eye. somehow, the zombies always seem to find where the survivors are. there are a couple of hints at what the shadow might be in this book, but we still don't know. i hope it is flushed out in the 3rd book. yes, i plan on downloading it when it comes out on 4/30/13.

overall, a good 2nd book. i enjoyed it. however, i wish all 3 books were combined into one full story. if you're interested in why i say that, please head over to my review of the 1st book.

Where does Into the Dark rank among all the audiobooks you’ve listened to so far?

That is a tough question, I listened to alot of books. I like the series and will get the next book as soon as I can

I like Jeff, he is a reluctant leader that makes me think about issues of responsibility and consequences

What does Jim Cooper bring to the story that you wouldn’t experience if you just read the book?

He does well, differentiating between voices and emotions

Great storyline and the author puts characters in realistic situations. The story is fast paced and seems like a much shorter book

I get frustrated when I have to listen to people doing stupid things in books and this is such a sharp contrast against the first book when there were just a handful of people behaving as sensibly as they can to survive.

The book picks up right off from the first book as if it was just one book, which it probably should be. At the end of book one I really thought they were in trouble and thought of all the bad things that was going to happen to them and Megan. As it turns out the group they meet isn't blood thirsty after all but led by a man who considers himself a benevolent dictator and won't let them go but forces them to survive together. So the entire book is basically about how our group try to delicately negotiate the terms of their stay the best they can within this new group.

Not bad, little cliche but the author made it rather interesting. Now the stupid bits. I don't want to listen about a 12 yr old boy sulking and his "issues". His "talking to" just went on and on and on and I just wish he went along on a scavenging run and get eaten. His childish issue just was a huge part of this book, far too big a part. Unless its a children's book, kids should be kept in the background because they are just annoying.

Then there are the two teenagers who I call Beavis and Butthead who screw around and bring ruin on the entire camp. Someone gets bit and rather than facing the reality of the situation our formerly clever Jeff wants to lug him around and after hoping he has some clever plan it turns out he doesn't and intends to die protecting someone infected.

Very difficult to listen through all the stupid things that happen and then, like the first book, abruptly ends almost mid sentence. Had pre ordered the third book already, so I'll give it a try and hope things will improve.