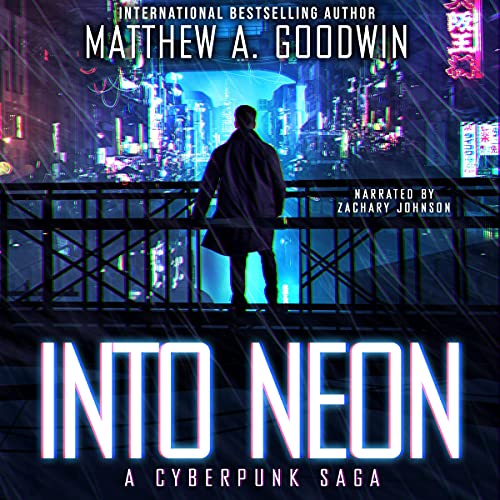 By: Matthew A. Goodwin
Narrated by: Zachary Johnson
Try for $0.00

When a corporate lackey has the rug pulled out from under his illusions, will his hidden fire flicker or ignite a rebellion?

Orphaned and alone, Moss is happy to have found a place in the world. But his humdrum working routines take a terrifying turn when a mysterious woman breaks into his apartment and hands him a data chip from his dead parents. Suddenly hearing messages revealing his benevolent employer has a far darker side, he braves the dangerous megacity streets in search of the truth.

Surrounded by outcasts and criminals and running on instinct, Moss stumbles onto a rebel group intent on exposing their corrupt oppressors. And though he fears for his life when his old boss has put a price on his head, the naïve man believes the key to taking down the enemy may lie inside the high-tech device...and his own cerebral cortex.

Will Moss’s attempt to fight the power cause him to terminally short circuit?

Into Neon is the electrode-laden first book in A Cyberpunk Saga science fiction series. If you like everyman heroes, futuristic tech, and immersive dystopian worlds, then you’ll love Matthew A. Goodwin’s mind-expanding epic.

Buy Into Neon to hack the system today!

What listeners say about Into Neon

A well-written, action-packed story in the vein of The Matrix and Blade Runner. The protagonist, who in the beginning of the book is a mostly content worker bee in a powerful corporation, is pulled out of his complacent life by a mysterious stranger. Action, revelation, and a host of memorable characters follow at a gallop until the climax. Definitely a fun read and looking forward to more.

super likeable chaactors. great descriptive setting. a wondeefull contribution for the genra. get this book!