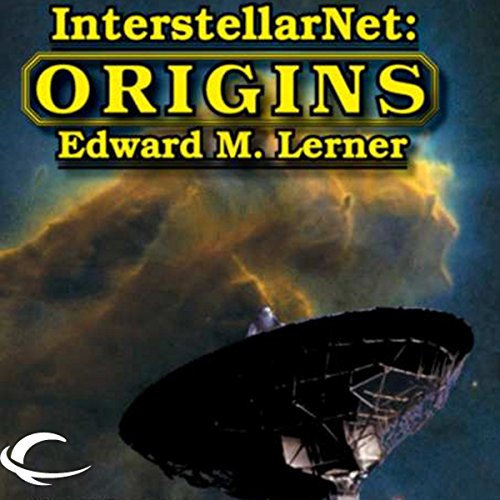 When the first call from the stars comes, do we even dare to answer?

Life changes for everyone in general - and for physicist Dean Matthews in particular - when astronomers detect a radio signal from a nearby star. First Contact forces humanity to face hard questions, and do it fast. Every answer spawns new questions. Every solution sets in motion a new and more daunting crisis to challenge Dean, his family - and an expanding number of interstellar civilizations - or generations to come.

"One of the most original, believable, thoroughly thought-out, and utterly fascinating visions ever of what interstellar contact might really be like." (Dr. Stanley Schmidt, Editor, Analog magazine)

Way too many rough edges

What disappointed you about Origins?

Editing - often uses sci-fi convention of "such and such was developed in the 20th century", but also used "photoshop" and "Enron" as verbs within a few hundred words of each other.

Narrator should perform, not read the text. Perhaps acting classes would help. Also look up words and pay attention to context to avoid mispronunciations. Example: - text: "suspect everyone" ... suspect is a verb - narrator: "Suspect: everyone", emphasis on 1st syllable of 'suspect', making it a noun. A dumb mistake unfortunately repeated several times

storyline had a lot of potential

purchase if discounted, otherwise give it a pass

I can't even finish this book

Would you try another book from Edward M. Lerner and/or J. D. Hart?

I would try other books by this author, and even retry this title if a new narrator was selected.

What could Edward M. Lerner have done to make this a more enjoyable book for you?

Having Mark Boyett narrate the story.

Would you be willing to try another one of J. D. Hart’s performances?

Only after he gets better direction on how to narrate a story.

Anger. I find the subject matter very interesting, but could not follow the story, or who was speaking.

I even tried slowing the playback to .75, which made it worse. I hope this is reread with another narrator.

I would change the reader! He could have been a computer for all i know. He was very mechanical in his delivery, adding almost no emotion or inflection to help the story. Some of his pauses for paragraph or sentence structures were non existent which made it harder to follow and caused it to flow awkwardly.
Common acronyms like SETI can be read and as a word and don't need to be read out S-E-T-I each time.

The story itself was an interesting take on interstellar commerce with no physical contact.

This is a Performance which is BLAND and uninteresting.
The story starts off very political with technology mixed in.
Sorry to say at section Five I stopped listening and have returned the book.