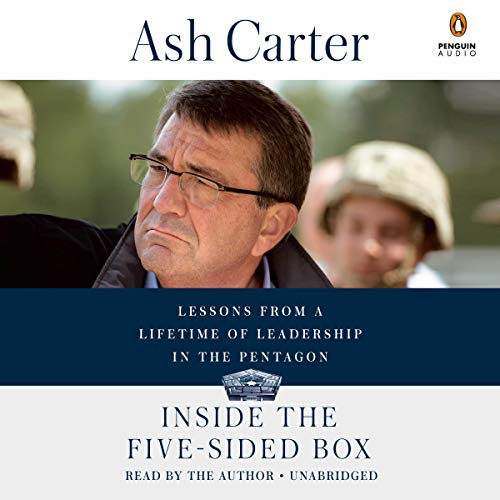 Inside the Five-Sided Box

The 25th Secretary of Defense takes listeners behind the scenes to reveal the inner workings of the Pentagon, its vital mission, and what it takes to lead it.

The Pentagon is the headquarters of the single largest institution in America: the Department of Defense. The DOD employs millions of Americans. It owns and operates more real estate and spends more money than any other entity. It manages the world’s largest and most complex information network and performs more R&D than Apple, Google, and Microsoft combined. Most important, the policies it carries out, in war and peace, impact the security and freedom of billions of people around the globe.

Yet to most Americans, the dealings of the DOD are a mystery and the Pentagon nothing more than an opaque five-sided box that they regard with a mixture of awe and suspicion.

In this new book, former Secretary of Defense Ash Carter demystifies the Pentagon and sheds light on all that happens inside one of the nation’s most iconic and most closely guarded buildings. Drawn from Carter’s 36 years of leadership experience in the DOD, this is the essential book for understanding the challenge of defending America in a dangerous world - and imparting a trove of incisive lessons that can guide leaders in any complex organization.

In these times of great disruption and danger, the need for Ash Carter’s authoritative and pragmatic account is more urgent than ever.

“In this intelligent, wide-ranging memoir, Carter, President Obama’s final secretary of defense, outlines the challenges and intricacies of working in the Pentagon and shares his organizational philosophy.... Foreign policy wonks will eat this up.” (Publishers Weekly)

“Ash Carter is a distinguished public servant and an exceptional student of strategic affairs. This book should be essential reading for anyone concerned about the evolution that technology and political upheavals around the world impose on us.” (Dr. Henry A. Kissinger)

“A lucid explanation of how the Department of Defense operates…an illuminating if unsettling account of what it takes to run ‘the largest and most complex organization in the entire world.’” (Kirkus Reviews)

What listeners say about Inside the Five-Sided Box

Like Bob Gates’ book Duty; here is a rare opportunity to get a firsthand look at the workings of our military at the highest level. Ashe Carter describes the details of the position of Secretary of Defense and some workings of the Pentagon.
Occasionally, Carter colors outside the lines with his support of Obama and his dislike of Trump. If you read between the lines and study actual policy and exec; you will find that he simply enjoyed working with Obama and personally disliked Trump.
Carter wasted a chapter plus numerous other remarks basically saying he disliked Trump but not necessarily saying his policies were wrong. If you listen closely he had a good working relationship with Obama but disagreed with a lot of his policies and really found Obama’s advisers way over the top and woefully inadequate to the important tasks at hand.
Recommend you forget YOUR BIASES and learn from the book and you will have a better appreciation for the enormity of responsibility of the job and office of both the President and the Secretary of Defense.

Ash goes in-depth on how the org is structured and how he ran it. His book starts with procurement. If that sounds interesting to you, you’ll like the book.

Not only did the book provide a look at the DoD, it also provided insight into the personality of the secretary himself. He’s clearly very pleased with himself and doesn’t tend to admit to many mistakes. He also continually criticizes a sitting President which I find less than great form for a senior cabinet secretary. In terms of narration, it sometimes sounds like he’s falling asleep reading his own book.

However, I did enjoy the read. Though he can come across as arrogant he's also clearly very intelligent and his background in science is genuinely impressive. He also knows how to run a very large org... at least according to him... but based on the org procedures he outlines in the book I believe he probably did do a reasonably good job. In reading certain passages, he really comes alive and even manages to flash a little personality - I really enjoyed these parts - I just wished they’d happened a little more often.

All in all this was a thorough look through an amazing org by a thoughtful person. I’m glad I listened.

It was amazing and mind blowing how the Department of Defense operates. It was also very eye opening the politics involved in the operation of oversight and budgeting or lack thereof! Some of it was pretty technical but not overwhelming.

Secretary Carter’s lessons in leadership is a must read for leaders and aspiring leaders at all levels-military, business, political and academic. It is a straight forward no fluff account of his 30 plus years serving our Nation. Filled with numerous examples and antidotes there is a lesson to be learned on every page. You won’t be disappointed.

I found the content very interesting. The author is, no doubt, one very smart man. The problem I had is that he lets you know that he is a very smart man. I have learned that wisdom and humility are of greater importance than intelligence.
I also did not care for his “rather elitist” criticisms of President Trump.
I would like to pose this question to the author: If you and President Obama were such an intelligent team and made such brilliant decisions, how is it the next president ran and won on a platform of “Make America Great Again”?

great story about our past and future

Ash is a little less than riviting, but the story content makes up for it!

Unless you think Barack Obama walks on water, this book is a waste of your time and money. Carter lost me when he wrote glowingly about Obama's decision making - when Obama was the least decisive president in my lifetime. Carter also writes glowingly about Susan Rice - she of the 5 Sunday shows wherein she defended the Obama administration's waffling on Benghazi.

I'm going to ask for my money back.

He's kicked the ball out there

Let's hope the USA some personal depth, to keep it going. The current political administration has laid waste to the State Department, the judiciary is being politicised.... 🌏

if you have trouble sleeping, read this. you'll be out in minutes. yawn yawn 🥱

Great insight to the workings of the DoD

This was a fantastic listen. The experience of Secretary Carter gives the book some great angles and provides a very broad understanding of the inner workings of the DoD ‘the largest organisation in the world’.