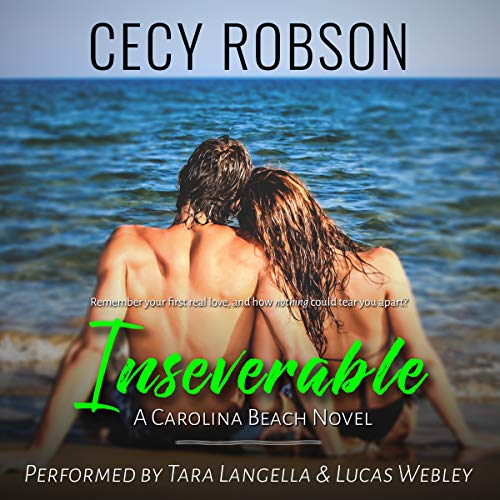 By: Cecy Robson
Narrated by: Tara Langella,Lucas Webley
Try for $0.00

Winner of the 2017 Gayle Wilson Award of Excellence.

How can you imagine forever with someone who's leaving everything behind?

Callahan, a former army sniper, wants to make an escape from his past and everything he experienced at war, but most of all, just not feel. Feeling leads to pain, and he's suffered enough. When he inherits a house on South Carolina's Kiawah Island, he packs his bags, lured by the peace and seclusion he thinks it will bring. But Callahan never counted on meeting anyone like Trinity....

Trinity has always been the cute and funny one who most guys overlook in pursuit of her "hot" friends. She became used to being everyone's pal, until the day the young man she was attracted to was drawn to her in return. He became her first great love and first crushing heartbreak when she found him in bed with one of her closest friends.

To move forward and to carry out her commitment to helping those in need, Trinity enlists in the Peace Corps, but not before returning to Kiawah for one last memorable summer. She just never imagined it would be so unforgettable.

Callahan doesn't want to get close to anyone - let alone Trinity. He finds her perkiness insufferable and her attempts to entice a smile distracting. After all, he's in Kiawah to leave all feelings behind. But when it comes to Trinity, who feels everything, it's hard not to feel something.

Neither expected to fall in love. No one could have predicted how inseverable they'd become.

What listeners say about Inseverable

Really enjoyed this! Cecy Robson never disappoints me! Her writing is superb and I love her characters! Trinity was awesome, she was a fun character who can't help but adore! I also loved Callahan, he was a man in some real pain with some truly traumatic memories from his time in Iraq. They were good together and I love how patient Trinity was with Callahan and how much she helped him deal with his PTSD. I thought the issues surrounding PTSD were well dealt with in the book! An excellent story, with a brilliant mix of humour and real heartfelt emotion! Well worth getting!