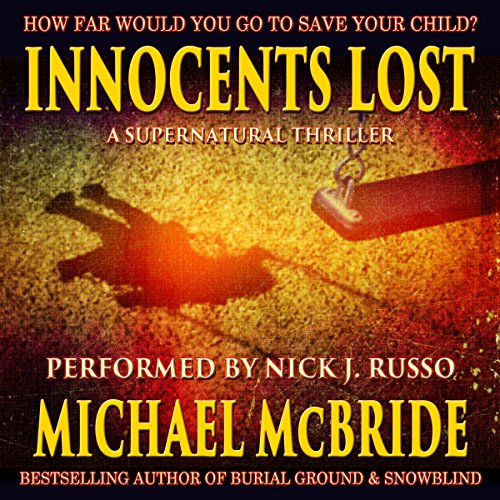 By: Michael McBride
Narrated by: Nick J. Russo
Try for $0.00

A young girl vanishes in broad daylight on her tenth birthday. Her father, FBI Special Agent Phil Preston of the Child Abduction Rapid Deployment Team, devotes his life to finding her and discovers a pattern in a recent string of abductions.

Dr. Les Grant leads a group of graduate students into the Wyoming wilderness in search of an unidentified Native American medicine wheel photographed by an anonymous hiker. Instead, they stumble upon a macabre tableau of suffering.

Fremont County Sheriff Keith Dandridge finds himself right at the heart of the mystery when twenty-seven bodies are disinterred in the Wind River Range at the westernmost edge of his jurisdiction, with the promise of more to come.

All the while, an unknown evil is summoning the men to its killing grounds, where the remains of the lost innocents are left to rot... and a fate far worse than death awaits them.

What listeners say about Innocents Lost

This book is thrilling as its genre states, and it is also paranormal; however, It's not full of demons or anything the really upset those who are tender-hearted or those who dislike satanic or demon themes.

This is an enjoyable read. Get the Audio version if you can. It's so worth it!

not believable and written to a formula

the promise was there to start with but gradually the story got quite formulaic. None of the suspense that mcbride packed into his previous novels. Top marks to the performer though.