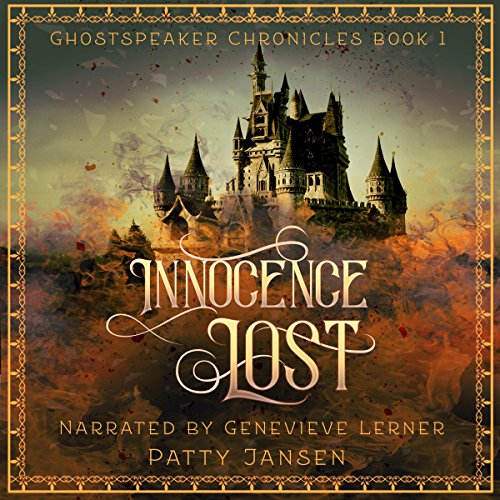 A young woman, evil magic, demons, and a kingdom in deep trouble

As the only child of a successful merchant, Johanna has her wits and a sense for business.

The royal family is in deep trouble: ever since the crown princess died of illness, the king has attempted to educate his son to become king. However, the prince is "not good in the head" and quite unsuited to the task. In his grief for his daughter, the king has run the coffers dry: He hired dubious magicians for even more dubious tasks. Those magicians circle like vultures waiting for the kingdom to fail. The king must get his son on the throne, preferably supported by a smart and well-off wife.

He holds a ball in his son's honor. Johanna has agreed to a dance. But the guests include a number of magicians who are not there for the festivities.

What listeners say about Innocence Lost

For Queen and Country

What a ride! This book started off with a feisty heroine who doesn't quite fit in. It expands to include magic, mystery, religion and politics. As many of these types of stories do, it was building towards a conflict between love and duty. Between freedom and responsibility. And then everything exploded. Literally. And the story went in directions I never anticipated.

Content-wise there is some violence and an explicit sex scene, although there is absolutely nothing sensual about it. It is probably the most painfully awkward sex scene I've ever read - and intentionally so. It serves a very important purpose to the plot and is not gratuitous.

This is the first book in a series and as such there is a lot of world building and character development in this book. It is full of drama and action, but it is not until the end that the picture that is being build really becomes clear and the story being told is quite different from what I anticipated from the beginning. There are a LOT of threads started and hanging at the end of this book - some interesting, some uncomfortable.

The narration was ok. It was a bit hollow or tinny at times and could lean towards whiny which didn't seem to suit Johanna, but overall was easy to understand and follow and she had good energy and expression.

This is an honest and voluntary review of an ARC

This was a really good story. I enjoyed the flow of the words and the nuances captured by the narrator. The characters are well developed and easy to like, or not in the case of the whiny Nellie, but they were all interesting. I really like the way the author captured the behavior and little details for the Roald character. Without coming right out and saying it, his characteristics are spot on for someone with that particular disability. Very good job! I'm looking forward to listening to the next book in the series!

I got this audiobook from the author for an honest review. This book was good but was not one of the books I will listen to over and over. It is about a world where people with magic are look on as evil and possessed, just because they can see the demons. One woman who befriend a girl with the vision is invited to the palace for a ball when demons attack the kingdom and it is up to the few that escape to survive and reclaim the kingdom.

Story wasn't for me

Just did not care for the story, it move along too slow. I found myself struggling to pay attention and finish it.

So, this was kind of a miss for me. First of all, the narration is ok, but there are some audio quality concerns. The recording is a bit tinny and she has a kind of sarcastic sounding lilt to her voice that didn't always seem to fit to me. That last part is just my opinion, so take that with a grain of salt. For the story, it was kind of boring for me. I just struggled to care about the king and his problems. IT was kind of an amalgomation of several disney prince/princess stories but geared towards adults with more sex scenes... The correlation isn't to the story/plot elements themselves, but more the premise. It's definitely not "Disney Happy" though. I just felt like I could see influences in the writing from the myriad of Disney stories that focus on a royal family or a non-royal becoming royal... Anyway, I just never got sucked into the story and felt apathetic throughout.

Patty Jansen sure have taught me a lesson with this book,
She taught me that good writing does all the difference, it was wonderful that I could feel exactly what the characters did, she really brought them to life.
Truly beautiful, I really need to continue listening to the rest of this series, somehow she was able to install in me that it’s going to get serious soon enough.
A masterpiece !!!

Yes I full heartedly recommend listening to this audiobook to all.

Even so that I got this audiobook for free I truly believe that I reviewed this one as honestly as possible.

Slow start with potential to a series.

*I have listened to this book for my own enjoyment.

This is the first time I've listened to Genevieve. Genevieve did a good job at reading through the story clearly. But, right off the bat I heard lots of space in the recording. There is a metal twang to her voice as well. With the sound of the background, you can hear where the stream was cut, either because she was done or because cut out a section. The sound of the background stops then starts again, leaving it feeling as it's not a constant flow. It sounds like she's in a large empty room, with wooden floors.

The story is a big build up for the King's ball. A lot of world building in the beginning. There is something with Johanna's friend and a potential danger coming to their city, but trying to find a way to tell people without telling about how she learned is a problem for Johanna. With this, most of the beginning is focused on getting to know Johanna and how she doesn't want to marry or go to the ball. Both things her father is saying she must do.

With getting to know Johanna and the buildup to the ball, I found the beginning to be rather slow. If it wasn't for being audio, I probably would have put the book down. Although, I'm not very taken with Genevieve's narration or voice acting as Johanna, and that might be part of the problem. Johanna sounded like a spoiled brat at the age of twenty-four with Genevieve's vocal innuendos.

As we go, the story of going to the ball felt like it was going to turn into a Cinderella type story. But it doesn't. When we get to the ball, things take a turn that draws me into the story. To meet Prince Roald and see how things come together. Now I can enjoy this. I liked the turn things made with Johanna after the ball.

The writing style didn't hit the beat with me. Others may enjoy it more, but wasn't for me. At times I felt that the emotions used were repetitive, and when I wanted emotions they weren't there. I definitely think the narrator could have done a better job, or picked a different narrator. Genevieve was a bit bland or to much attitude that gives Johanna a stuck up feel, which she's not by her actions.

I'm curious about the characters and where they end up next because there is a cliffhanger ending, but I'll likely pass on the series with all others I have to listen to.

Really enjoyed this story, the narration was great and the author has a real way of bringing the world to life. Very descriptive and an interesting tale!

I really enjoyed this book, can't wait to get the next one. Patty Janssen really engages the reader and definitely left me wanting more. Not quite so sure about the narrator though.