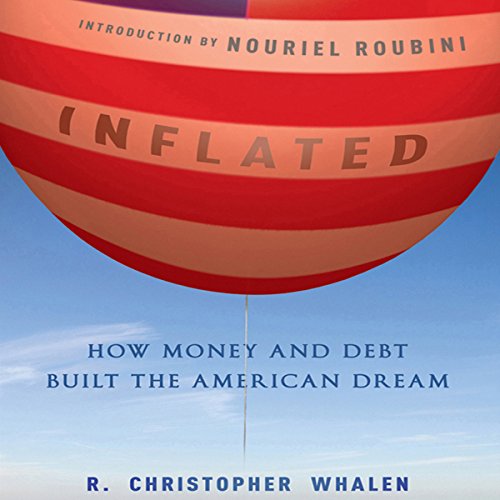 Americans as a whole view themselves as reasonably prudent and sober people when it comes to matters of money, reflecting the puritan roots of the earliest European settlers. Yet as a community, we also seem to believe that we are entitled to a lifestyle that is well-beyond our current income, a tendency that goes back to the earliest days of the United States and particularly to get-rich-quick experiences ranging from the Gold Rush of the 1840s to the real estate bubble of the early 21st Century.

Inflated examines this apparent conflict and makes the argument that such a worldview is so ingrained in us that to expect the United States to live in a "deflated" world is simply unrealistic. It skillfully seeks to tell the story of money, inflation, and public debt as enduring (and perhaps endearing) features of American life, rather than something we can one day overcome as our policy makers constantly promise.

The gradual result of the situation we find ourselves in will inevitably lead to inflation, loss of economic opportunity, and a decline in the value of the dollar. This book will show you why, and reveal how we might be able to deal with it.
©2011 R. Christopher Whalen (P)2012 Audible, Inc.

This book shows its clarity and usefulness, for example, in the clearest yet-seen (of about a dozen I have read) explanation of events from the close of the Civil War through the Gilded Age and Progressive era, from the standpoint of the managing of our currency (for better and worse). Alongside colorful personalities, the background is solidly told, moving across political parties, the development of big corporate business, plays of financial speculators (recognizable in parallel to today's rogues' gallery), various odd policies tried and abandoned, reactions of domestic and foreign players to these (sometimes boneheaded) moves, and so on. The financial panics of that era are very well explained, event by event but never tediously. The delivery is just colorful and personality-driven-enough, alongside good solid narratives connecting all the dots. It is like the ideal amount of sauce to make the food tasty, while still being nutritious. The book sustains this quality and tone throughout.

An economics-centric history book can't lack some slant, some point of view. Keynes was so right about most of us laboring intellectually in the shadow of one or another dead economist. Such biases are inherent to history and economics, which are art (frequently artifice) and opinion as much as science. Everything is malleable, in service of some framework (note elsewhere Nassim Taleb's sometimes hilarious critiques of such "Procrustean beds".) To climb in this scholarly and intellectual discipline, I must often somewhat mute my objections for hours, listening for new slants (new to me), and then doing lots of rumination about it all. Here, the author's slant is toward Murray Rothbard's sort of libertarian/Austrian base, but to this author's credit, there is a humility and an open mind and voice that glides over much of what, in Rothbard, surfaces as sharp elbows and ideological rigidity. This author realizes there are other points of view, and that some of them are useful, in the various turns and reversals of messy real life, and these nuanced facets and sub-stories driven by various ideologies and perceptions help explain the (hi)story. As an example, the author gets points for including the preface by Nouriel Roubini in which Roubini openly disagrees with aspects of the author's approach. This is a bracing tonic from the effects of modern media (audiences) in pushing "personalities" who stake out some stiff intellectual/political node from which to promote their (increasingly cartoonish, caricatural) "brand," which truncates discussions and impoverishes many of the (former citizens and thinkers, now) "consumers" of the "brand." (As a result, at this writing, we have such a cartoon character running as president at the head of a major party, and are left to contemplate the historical misadventures possible from that. Then again, good history shows we have survived such characters before,aplenty.) The history here is elevated beyond that. I am finding it enjoyable and educational, despite my previous exposure to various versions of this story. It helps pull everything together sensibly. And we get to see some amazing missteps and madnesses of crowds which DIDN'T do us in!

A history lesson on the financial system

This is a great recap of the modern history of financial markets from the great depression through today.