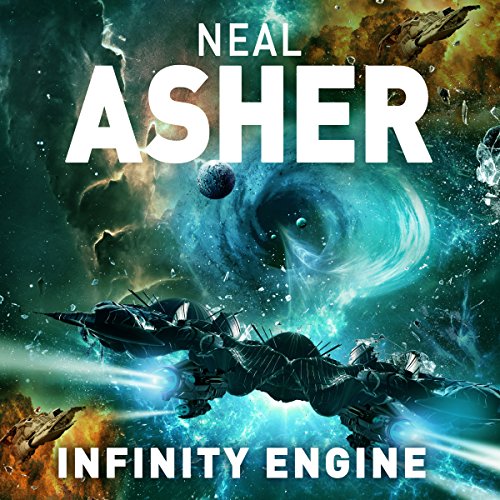 A man battles for his life, two AIs vie for supremacy and a civilization hangs in the balance....

Several forces now pursue rogue artificial intelligence Penny Royal, hungry for revenge or redemption. And the Brockle is the most dangerous of all. This criminal swarm-robot AI has escaped confinement and is upgrading itself, becoming ever more powerful in anticipation of a showdown.

Events also escalate aboard the war factory. Here Thorvald Spear, alien prador, and an assassin drone struggle to stay alive, battling insane AIs and technology gone wild. Then the Weaver arrives - last remnant of a race that died out two million years ago. But what could it contribute to Penny Royal's tortuous plans?

And beyond the war factory a black hole conceals a tantalising secret which could destroy the Polity. As AIs, humans and prador clash at its boundary, will anything survive their explosive final confrontation?

What listeners say about Infinity Engine

The Polity universe gets me through some serious boredom!

Neal takes you to different space time with recognisable characters in a completely new form and let’s you drift through the complex weave of a plot while eating up the detail and imagination.

I thoroughly enjoyed this performance by Peter Noble.
I feel he captured the nuances of the players within the story and delivered a believable performance of all the different characters.

I listened to this trilogy back to back and found I just couldn’t wait to keep listening (damned work getting in the way!) highly recommended

Story was great, reading was great for about 95% of the time, but there was a few cases where there was a jarring edit. The levels were different and not always with a smooth transition.

love the book but really don't like the narrator! Jonathan Yen originally narrated the 1st book in the series, dark intelligence and he was so much better! Really annoyed that they didn't use him for book 2 and 3 :(

So great to find a author i hadn't read before and be delighted to find some parallels to the now departed Ian Banks.

The story line was good but just slightly lacked clarity for me.

Narrator was the best I've heard on Audible absolutely brilliant.

Overall i recommend this book to all Sci Fi lovers.