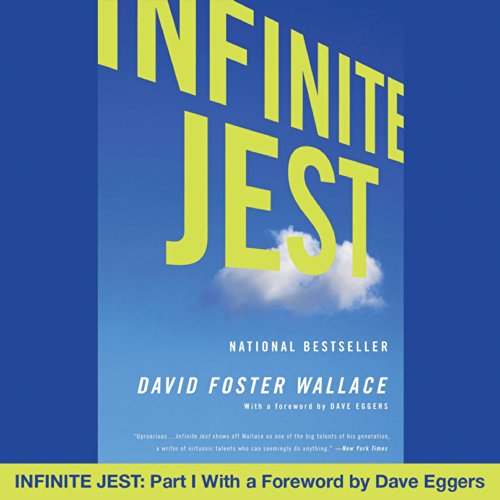 Infinite Jest: Part I With a Foreword by Dave Eggers

By: David Foster Wallace
Narrated by: Sean Pratt
Try for $0.00

A gargantuan, mind-altering comedy about the Pursuit of Happiness in America set in an addicts' halfway house and a tennis academy, and featuring the most endearingly screwed-up family to come along in recent fiction, Infinite Jest explores essential questions about what entertainment is and why it has come to so dominate our lives; about how our desire for entertainment affects our need to connect with other people; and about what the pleasures we choose say about who we are. Equal parts philosophical quest and screwball comedy, Infinite Jest bends every rule of fiction without sacrificing for a moment its own entertainment value. It is an exuberant, uniquely American exploration of the passions that make us human - and one of those rare books that renew the idea of what a novel can do.

What listeners say about Infinite Jest: Part I With a Foreword by Dave Eggers

Doesn't include the footnotes!?

This is an amazing book, the low rating isn't for the book itself but for the audio book. It first says how important the footnotes are to the story then says they won't be including them in the recording? Saying that they will call out the number of the footnote so you can follow along with a paper copy???

I bought this to re experience a book I loved and didn't have the time to sit down and read the paper copy. What's the point of buying an audio book if you have to lug around a 1079 page book with you to follow along?

This is stupid. I've listened to other David Foster Wallace audiobooks and they included the footnotes just fine. What the f**k! I'm so angry.  

The wrong format for this book

This is obviously a great work of American fiction, and I look forward to finishing it as a conventional tree-based tome. It's indecipherable as an audiobook.

I would recommend it to people who have a sense of humor and enjoy high brow lit. Eggers provides a great intro and the narrator, Sean Pratt, could not have done a better job.

Which character – as performed by Sean Pratt – was your favorite?

Not one character in this multi-character book was lazily done.

smart enough to observe / too timid to participate

my youngest child, an undergraduate, takes english classes
wallace's "infinite jest" and joyce's "ulysses" were assigned and compared
i downloaded "infinite jest" in hopes it'd give us something to talk about

the book was published feb.1996 / sadly, mr. wallace hung himself 9.12.08
some have read "infinite jest" as a insightful commentary on modern america
others could see it as a very long, somewhat academic suicide note

the book's tone is privileged, precocious, a bit timid and somewhat remote
wallace wants to comment on life, while at the same time keeping life at arm's length
he's the observer of the spectacle rather than a sweaty participant in the struggle

wallace's intense intellect, energy and talent for language are certainly admirable
but by the end of "infinite jest", part of me just couldn't wait for it to be over
sadly, mr. david foster wallace may have come to that very same conclusion

I had to buy the book

I couldn't take it on audio. Too complex and challenging for dog walking. Better by the fire.

The footnotes are necessary at times and amusing at others.

I read this book before I listened.

I am writing my grocery list in my head

I want to like this. I really do. I just can’t get past the droning cadence of it to find the story. Can’t bring myself to go on with it. Im done.

The Endnote Footnote Conundrum: On the Becoming of a True Nerd

Both the story and narration were excellent except for the disembodied female-sounding voice peppering the (difficult enough to follow) plot with endnote-footnote enumeration. This hybrid "solution" addressing the endnote-footnote matter was distracting and disruptive, merging the worst of both worlds: audiobook and paper. I quit the book at chapter five as this "solution" rendered the book infinately unendurable.

What made the experience of listening to Infinite Jest: Part I With a Foreword by Dave Eggers the most enjoyable?

The book is magnificent, and I was apprehensive about listening to it because I wanted the reader to do it justice. Mr Pratt does a fantastic job. Fantastic. I downloaded this to listen to when my eyes were otherwise occupied and I couldn't read my hard copy and now I just want to listen to the whole thing.

The reviewer who made insistent demands that the woman speaking the numbers should be removed – as if she were some kind of interfering glitch – clearly did not listen to the first two minutes of the recording in which they explain that the numbers are a nod to Wallace's endnotes, which they don't include in the narration. It would be kind of impossible to include the endnotes in the recording, and I think this is a pretty good way of not excluding them entirely.

Phew! Finally I can understand this text!

Would you consider the audio edition of Infinite Jest: Part I With a Foreword by Dave Eggers to be better than the print version?

Absolutely, for the novice to this type of literary fiction, I cannot tell you how many times I have started and given up on the actual book. This performance by Sean Pratt is really humorous, sad and entertaining.

I guess The Mothers! They are represented in such a way she feels just out of view.

Have you listened to any of Sean Pratt’s other performances? How does this one compare?

I think in the beginning when Hal is trying so hard to be "normal' and be heard.

Cannot wait for my new credit for Part Two.

I admit that I was apprehensive. Books that I have hated with a passion include: Ulysses, Tropic of whatever and 2666.
This half of the book is extremely long, it is disjointed and as a result it took me hours to pick up the several narrative streams. But it is also clever and funny (really, laugh out loud funny in parts); and I liked the way it crackles along. The narrator is brilliant. He gives the impression that he loves the book. I wouldn't have had the time nor probably the patience to tackle the print version.
I hope and expect to be able to give Part 2 5 stars.

Infinite Jest works well in audiobook form and this is in no small part helped by Sean Pratt's fantastic reading (complete with impressive changes in accent, tone and characterisation). This is long listen but the chapters are well paced, and as mentioned, Sean Pratt reads with a deep sensitivity and knowledge of the text and the author -- humour is particularly effectively conveyed! Highly recommended. Only thing is that you've got to keep listening on a regular basis otherwise you'll have spent a lot on an Audible subscription if you meander along like I did...

undeserving of a reputation for difficulty

it may be very deep, I don't know, but it is funny and enjoyable and also a bit disgusting. highly recommended.

Would you listen to Infinite Jest: Part I With a Foreword by Dave Eggers again? Why?

Yes. Because it's utterly, utterly wonderful. It's pure genius on every level.

One could say that the book is somewhat structureless, but that wouldn't be quite right. It's as though it was written from the inside out. The only thing I can think of that's at the same height of seemingly effortless brilliance is the music of Mozart ...which he wrote down as fast as he possibly could, because it was all there, as if ready composed. As though he didn't compose it - he just wrote it all down, as fast as he could, or so it would seem.

Which character – as performed by Sean Pratt – was your favourite?

Hal Incandenza, so far. I'm two thirds of the way through the part one.

That would be impossible.

Yes. I would like to say, hand on heart - and I have listened to very many audiobooks - that this is, by a long way, the very best of them all. Sean Pratt gives a sublime performance. It's absolutely spellbinding and always perfect. I can't imagine how the hell he did it. Read the book - listen to the audiobook. It's an expression of the pure force of life itself. Art at the highest level. I am overwhelmed by its magnificence. It's up there with the Mona Lisa and The Well Temperered Clavier. My deep thanks to David Foster Wallace. RIP

A gorgeous monster of a book read brilliantly

I have owned a paperback copy of this book for years and it is one of the most intimidating books I have ever purchased, it is written in a beautiful, intelligent but complicated style and no matter how determined I have been to read it I always end up leaving it on the shelf unfinished and a little tired... so I got the audiobook and listened to it instead, while it is still a very long listen, the story is absorbing and intricate and the narrator does a great job in conveying the different characters and perspectives to keep you engaged and hooked into the story. I've listened to it twice now and it's genuinely one of my favourite books. I could not recommend this book and especially this recording more!

The most profound publication of our time

The most profound publication of our time, if you could transcribe the internal mechanations of today's culture it would read something like this.

Fantastic and this is just part one

The boom starts slow, and maintains a leisurely pace but oh my God is it brilliant. And once it catches on and gets into the meat of the story and you start making sense of what's going on, it becomes something you want to be listening to at all times. Which is great considering the full book with footnotes is some 75+ hours.

This is an amazing reading of my favourite book. Not an easy one to do but I can't imagine an improvement on it.

The comments are essential so download that too and juggle them both.