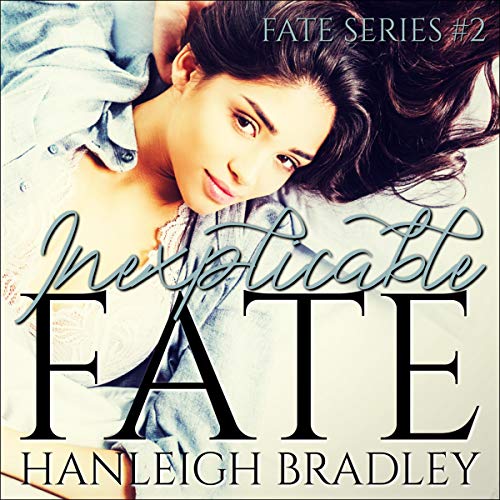 By: Hanleigh Bradley
Narrated by: Crystal Crockett
Try for $0.00

"I can't protect her and what's more, she doesn't want me to."

Detective Sergeant Georgia Kentley is walking right into a trap and she knows it.

That won't stop her. Not when she knows there's a life on the line.

Walker Trent, boyfriend and boss, doesn't understand why she can't just do as she's damn well told and stay put. With Georgia's life on the line, DCI Trent is coming after her. Whether she wants rescuing or not, he's on a mission to save her life and destroy anyone trying to hurt her.

She's convinced she doesn't need saving and he's scared that this time he'll be too late.

Inexplicable Fate is the second book in the Fate series, a complete police romantic suspense series.

Nothing is wrong with being saved except, usually someone has to risk themselves to save you. Being rescued is Georgia's worst fear.

The action continues in this book the second in the series. Georgia is feisty and committed to do the right thing even if it kills her. Their relationship is evolving even as the hunt for the serial killer escalates."\

What listeners say about Inexplicable Fate

This picks up where the prior book left off. Detective Sergeant Georgia Kentley is about to enter the grips of a madman. A serial killer. There are surprises and twists that were unexpected. I was pulled in from the beginning and couldn't stop listening. Speaking of listening, I like Crystal Crockett, generally speaking, but not for a book set in London where all of the characters are Brits when she is obviously American.

I've been waiting to read the conclusion of the first book, unfortunately, this was not the one I was hoping for. the book ends with a "continuing in the next book", but not with a cliffhanger like in the first one - it feels more like there are still open issues the author didn't want to bother with. again - I don't understand the choice of one (this time female) narrator and not two. the narrator did a good enough job with the female voice, but the male voice was automatic and off-putting. I received a free review copy of this book and am voluntarily leaving a review.

Barely a book. Save your credit/money

I can’t believe they cut what should have been 1 book into 3. Talk about a money grab. It really is a shame. I was truly enjoying this story. I was annoyed with the cliffhanger at the end of book 1, but I was engrossed in the story so I continued on. Book 2 is only a few chapters, not even 2.5 hours and it ends in another cliffhanger. This is just ludicrous. Save yourself the aggravation and buy a book that didn’t go through the shedder.

Inexplicable Fate by Hanleigh Bradley is a police romantic suspense that I listened to on audio narrated by Crystal Crockett. I absolutely love Georgia’s character. She is independent and strong minded and a bit stubborn. I love the chemistry between Walker and Georgia. The story does end on a cliffhanger but that wasn’t much of a surprise since it’s the second book in the four book series. I can’t wait for the next book in the series Irreversible Fate to be released on audio. Crystal did an amazing job on the narration. She really brought the story to life.

Really good sequel. There was a lot of action packed into this short sweet story. I got a kick out of her panic at the idea of marriage. Looking forward to the final book. Excellent as an audiobook.

I received this book free for an honest review. Another great listen I am really enjoying this series and looking forward to the next book.