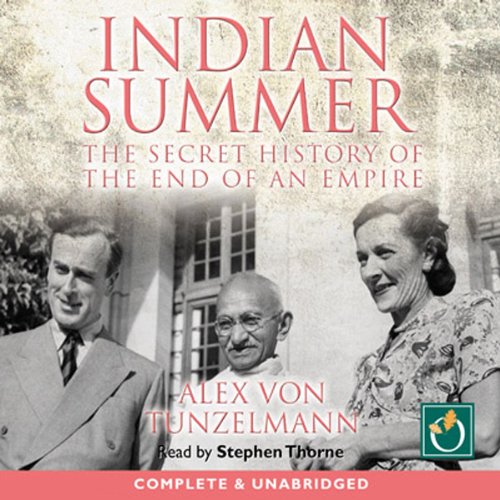 By: Alex von Tunzelmann
Narrated by: Stephen Thorne
Try for $0.00

At midnight on 15 August, 1947, India left the British Empire. This defining moment of world history had been brought about by a handful of people: Jawaharlal Nehru, the fiery Indian prime minister; Mohammed Ali Jinnah, leader of the new nation; and Louis and Edwina Mountbatten, despatched to get Britain out of India.

Within hours of the midnight chimes, their dreams of freedom and democracy would turn to chaos, bloodshed and war. Behind the scenes a secret personal drama was unfolding, as Edwina Mountbatten and Nehru began a passionate love affair. Steeped in the private papers and reflections of the participants, Indian Summer reveals how the acts of a few players changed the lives of millions and determined the fate of nations.

"A true tour de force:absorbing in it's detail and masterly in the broad sweep of its canvas." (Sir Martin Gilbert)

What listeners say about Indian Summer

Its gives a very detailed account of India's history. It's struggles and candid look inside the lives of the people who affected it's fate the most. Nehru, Gandhi and the Mountbattens have been covered very well.

A clever,succinct and a jolly good read

If you could sum up Indian Summer in three words, what would they be?

I thought this was an excellent read, the telling of an important event from enriched by the complex and fascinating characters who participated in the partiiton of India. The narration was excellent. I would recommend this book to anyone who was interested in the history of the Raj. Ps Sorry about the grammar the program won't let me correct it properly.

Excellent storytelling by both the author and the narrator. The work powerfully transports the reader back to the era described.

Great but narrator let it down

Great read but the choice of narrator let it down. Why choose a man to read a book by a woman? Usually I get the author or closest thing to the author to read it? And on top, why a man who clearly can't pronounce any of the Indian words, names and places. This is an Indian history book! I had to frequently stop listen to find the written version of what he said because I couldn't understand his terrible pronunciation.

How and why the British Raj ended.

Definitely. This not only gives a very readable history of India but also an insight into the characters involved. There is a very interesting insight into the relationship between Lady Edwina Mountbatten and Jawaharlal Nehru. It also made me realise that Gandhi was not quite the force I had thought.

I did not have favourites. I did however come to view characters I thought I knew in a different light.

This made me embarrassed to be British and made me very thoughtful about other more modern events we have been, and are, involved in.

I found this book very easy to listen to. Stephen Thorne reads it well and kept my interest.

Indian Summer: The Secret History of the End of an

Covering a vast subject the end of empire in India will interest many people . Its intelligent and scholarly but still entertaining and informative , well read too. Certainly a book worthy of your time and investment.

Well read and written. Fascinating insight into a momentous time. It is well worth reading.

Marvellous read, full of details.
Informative for anyone interested in the largest Empire in the world history (by land expansion).
Intense but in a good way. It tells so many stories of important names such as Dickie Mountbatten and his wife, Gandhi, first Indian PM Nehru and the founder and First governor of Pakistan Jinnah.

Rich details on the independence of India, Pakistan then Bangladesh.

An eye opener for me regarding the recent history of India and it's partition. Beautifully narrated.

The characters tell the story

I felt this book was like a collection of biographies, interwoven to tell the story of India becoming independent from the British Empire. The Mountbattens (Louis and Edwina, the latter being a substantial figure herself rather than just "the wife of"), Nehru, Gandhi and Jinnah form the nucleus, but others such as Chuchill and the British Royal Family make plenty of appearances. The approach works extremely well and the overall effect is a thoroughly enjoyable account of the period. The later lives of the main players are also covered - there is no abrupt ending with Indian independence - which adds to the biographical feel of the book.

I did feel that Louis Mountbatten, who comes out of the book rather badly, was probably unjustly treated here. I just don't believe that someone who held the posts and achieved what he did can have been as bad as is made out.

That criticism aside, this is a fine book which I will probably listen to again at some point. It is well narrated too. I have no difficulty in awarding it 5 stars and recommending it to anybody with any interest in India or the period.

Fantastic story of the creation of two new nation's India and Pakistan and an unlikely romance set to the backdrop of India's independence from Britain in 1947. Superb narration by Stephen Thorne.

Excellent listen on a fascinating time.

Very well read. An informative and at times amusing history with some great characters. Amazing people. A good listen

Creation of Pakistan from the Indian Sub-continent

Don’t know where the writer gets her facts from and since she sounds so sure and certain, it would have been interesting to know the sources of this historical narrative?? If it is that.

Interest but drawn out