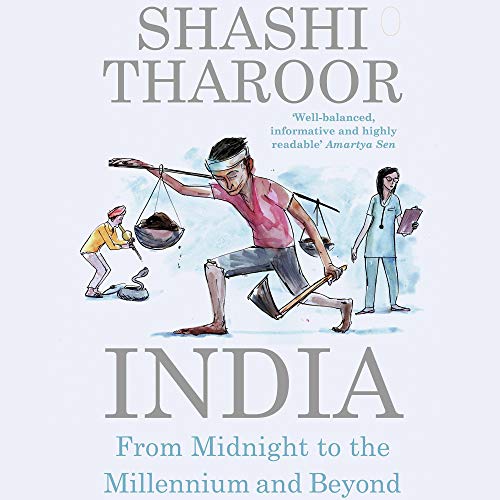 From Midnight to the Millennium and Beyond
By: Shashi Tharoor
Narrated by: Bhavin Joshi
Length: 18 hrs and 59 mins
Categories: Nonfiction, Politics

India: From Midnight to the Millennium and Beyond is an eloquent argument for the importance of India to the future of the industrialized world.

Shashi Tharoor shows compellingly that India stands at the intersection of the most significant questions facing the world today. If democracy leads to inefficient political infighting, should it be sacrificed in the interest of economic well-being? Does religious fundamentalism provide a way for countries in the developing world to assert their identity in the face of Western hegemony, or is there a case for pluralism and diversity amid cultural and religious traditions? Does the entry of Western consumer goods threaten a country's economic self-sufficiency, and is protectionism the only guarantee of independence?

The answers to such questions will determine what the nature of our world is in the 21st century. And since Indians account for almost one-sixth of the world's population today, their choices will resonate throughout the globe. Shashi Tharoor deals with this vast theme in a work of remarkable depth and startling originality, combining elements of political scholarship, personal reflection, memoir, fiction, and polemic, all illuminated in vivid and compelling prose.