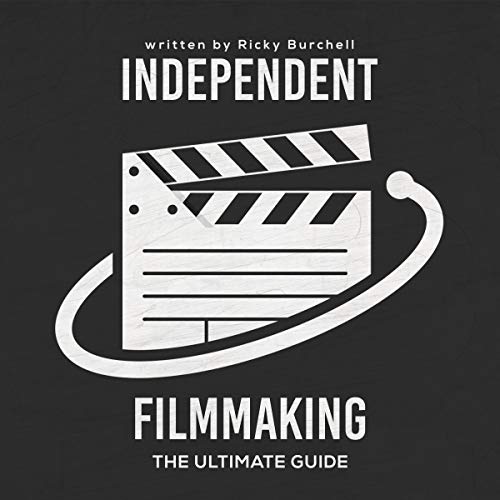 By: Ricky Burchell
Narrated by: Trevor O'hare
Try for $0.00

So, you want to make a movie and you’ve never done it before. Well the Independent Filmmaking: The Ultimate Guide is a book that can get you started on the right path and learn what to expect going on the journey of independent filmmaking.

You will learn the basics of script writing, pre-production, finding cast and crew, production, camera, lighting, sound, editing, and distribution, just to name a few. Learn from me, a filmmaker who has learned and found success in making independent films while seeing and going through all the pitfalls.

Ricky Burchell is a successful writer, director, and producer whose “indie films” have been seen all over the world. His career in independent film started as an editor and graduated to well respected writer/director.

What listeners say about Independent Filmmaking

I appreciate it, please recommend it

Filmmaker's Dictionary. I should be proposing this audible to someone. It's an outstanding audio-book to inspire.

I love this audible. I was always thinking that I was missing just the core knowledge of filmmaking, rudimentary stuff that you don't know. This audible, which is pretty much a textbook, is perfect to tell you from the very beginning, what you need to know.

This audible is incredible! The author uses fun metaphors to explain in-depth all aspects of filmmaking.

Bought this for my husband, who makes a pretty impressive family Zombie Apocopolypse movie every summer. (Yes, it's silly, be we have a great time and make great memories while he learns about filming.)

One of the best Audible that I have bought.

This audible is amazing. I recommend this audible to every filmmaker. Required listening for anyone interested in the Industry.

Great resource tool. I'm studying filmmaking and this audible has a lot of great topics and good explanation about them.

Bought a second copy for a fellow artist, well written and easy to listen to. Best audible ever for every video shooter.

Must have for any filmmaker

It is the perfect audible to use when a technical or production problem occurs. Almost every film class I have taken recommended it.

I love it and suggest it

A comprehensive guide to turning me deeply. Books like these are plenty and often say the same things, this does it with a spin that I think young people will enjoy. Glad addition to the library.

This is the audio-book I was looking for

Very audible auxiliary-must listen to help! The best filmmakers book hands-down! MUST HAVE for any video enthusiast or for anyone who's aspiring to enter the film Industry.

A must have for independently filmmakers

The audible is easy to listen and to the point. It seems to me that it covers everything you need to know, at least every question I had was answered in some way in the audible and, again, they were very easy to find!

The Ultimate Guide - No

If you are coming from 'I have absolutely no idea', then it may be useful.

However if you have done some basic research, and you probably should. Then it doesn't really provide any 'Oh, I hadn't thought of that' details

This audible outlines a detailed step by step plan for producing an independent film. Much of the advice is very valuable and encouraging.

This audible is becoming the reference audible among a growing field of independent moviemaking audibles serving the new boom in filmmaking. This is a must-have audible.

Burchell tells it all!

Burchell tells it all! This is by far the most comprehensive audible on the movie business I've ever listened.

Ricky puts it all together as he shows step by step how to put a film together from conception to showcase.

If you're interested in making your independent movie, this audible will be a welcomed addition to the many that you probably already own.

about making a film

A lot of good information in this audible. I listened to it and made an independent movie.

This is a useful audible. The good audible based on the filmmaking workshop given by the author.

ALL THE FACTS YOU NEED

Great audible. This one keeps me going and I could have finished the audible the first day. But in essence, this is the material you want to know. And he has all the facts.