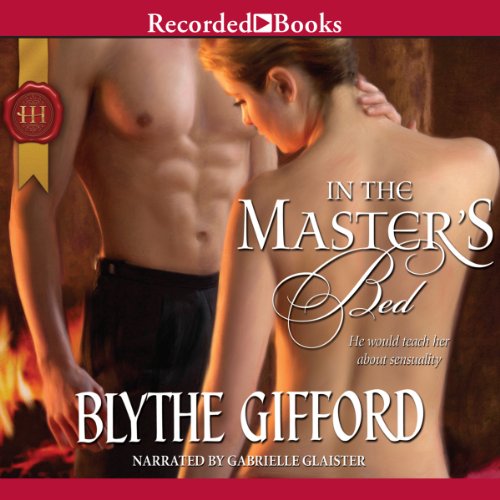 In the Master's Bed

By: Blythe Gifford
Narrated by: Gabrielle Glaister
Try for $0.00

Blythe Gifford’s spellbinding medieval romances have captured the hearts of fans and critics alike. Set in 14th-century England, In the Master’s Bed features Jane de Weston, a young woman who decides to disguise herself as a man to gain her independence. What she doesn’t count on is falling for Duncan, the strapping Scotsman who takes her on as his apprentice. When he discovers Jane’s deception, Duncan knows he should send her away, but the yearning he feels for her is begging to be unleashed - and Jane is a very willing pupil.

What listeners say about In the Master's Bed

I purchased this book on a whim. I didn't really have high expectations and wasn't even sure what the book was about. I am happy to say that it was amazing! If you are looking for a deeply sensual or humorous story, this is not it. However, I felt that the writing was beautiful and that the author really tried to capture what life would have been like in the 14th century. The story is the process of growing from adolescence to adulthood. This is not an easy journey but unforgettable. I think for those of you that enjoy historical romance that is not filled with gilded rooms and easy lifestyles, you will enjoy this book. Some love scenes but mostly just building up to in by forming friendship.

I liked the storyline

I love stories that show struggles and triumphs and this one delivered. The story describes each character beautifully which made it easy to listen to. I can identify with Jane because if lived back then I would probably be a tomboy too. (I would want to wear pants instead of dresses! Guess I'm spoiled.) The narrator did a wonderful job too.

Not a bad listen.

Overall the book had an intersting story line and the narrator was very good. However, the quick wrap up at the end ruined it for me. The story was going very well until the last hour or so then everything just seemed to be kicked into high gear, things were resolved and the happy ending complete. If the author would have just taken her time like she did the rest of the story it would have been a much more enjoyable listen.

Was looking for something different in a love story beside the same old hate love relationship, it is getting old that most of the love story only become good at the end no substance to keep you lock in. This is the one if you need change.

Starts out young tomboy feel she can not do anything correct when it comes to women work decides to run away and is mistaken as a young boy of 15 and than discovers the desires of a woman quickly lol. As she tries to fight it and just become a student ( as a boy)
Her only savior is the one she he tries to avoid. And Duncan confused to why he feels so attractive to this young stubborn boy who does everything to avoid his help.

Defiantly worth the credit. Sexy,sad and revealing secrets never spoken

Great read, had me laughing and crying

What did you love best about In the Master's Bed?

I loved the mystery.

What was one of the most memorable moments of In the Master's Bed?

When Duncan discovers the truth!!!! by far the funniest part in the whole book.

I thought she did a great job, she was very easy to listen to.

This audio book was great surprise, the storyline is fresh and loved all of the characters.

I loved Duncan and Jane - they are a great match.

When Duncan found out that John was actually Jane.

Cute love story but the ending is kinda boring and upsetting. Girl is a tomboy in a time when ladies are suppose to be ladies but she finds love in the tutor who trains her. He discovers she is a girl and teaches her all about smex. Ending get boring after the love affair though, I felt like the writer just wanted to end the story.

Not a buy. Wait for a credit.