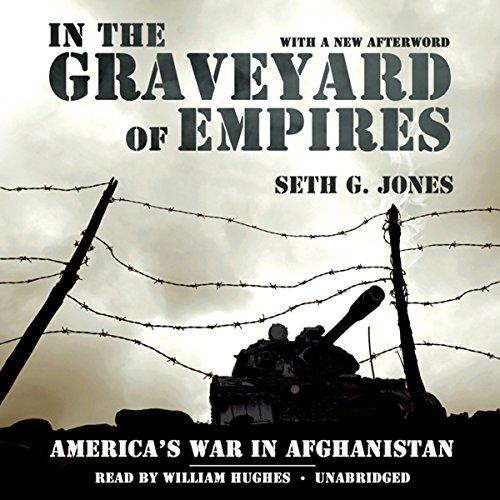 In the Graveyard of Empires

This definitive account of the American experience in Afghanistan is a political history of Afghanistan in the “Age of Terror” from 2001 to 2009, exploring the fundamental tragedy of America’s longest war since Vietnam. After the swift defeat of the Taliban in 2001, American optimism has steadily evaporated in the face of mounting violence; a new “war of a thousand cuts” has brought the country to its knees.

After a brief survey of the great empires in Afghanistan, Seth G. Jones examines the central question of our own war: how did an insurgency develop? Following September 11, the United States successfully overthrew the Taliban regime. It established security throughout the country, and Afghanistan finally began to emerge from more than two decades of conflict. But Jones argues that, as early as 2001, planning for the Iraq War siphoned off resources and talented personnel, undermining the gains that had been made. After eight years, the United States had pushed al-Qaeda’s headquarters about one hundred miles across the border into Pakistan.

While observing the tense, often adversarial relationship between NATO allies in the Coalition, Jones introduces us to key figures on both sides of the war. Using important new research and integrating thousands of declassified government documents, Jones analyzes the insurgency from a historical and structural point of view, showing how a rising drug trade, poor security forces, and pervasive corruption undermined the Karzai government, while Americans abandoned a successful strategy, failed to provide the necessary support, and allowed a growing sanctuary for insurgents in Pakistan to catalyze the Taliban resurgence.

Examining what has worked thus far—and what has not—this serious and important book underscores the challenges we face in stabilizing the country and explains where we went wrong and what we must do to avoid the disastrous fate that has befallen many of the great world powers to enter the region.

“Seth Jones has the answer to the million-dollar question…Until Seth Jones, nobody actually sought an empirical answer. Nobody crunched the numbers.” ( Esquire)
“Gauging whether the U.S. and its allies can succeed in Afghanistan is only part of what Jones’ excellent book is about.” ( Financial Times)
“[Jones] zero[es] in on what went awry after America’s successful routing of the Taliban in late 2001. His narrative is fleshed out with information from declassified government documents and interviews with military officers, diplomats, and national security experts familiar with events on the ground in Afghanistan.” ( New York Times)

What listeners say about In the Graveyard of Empires

Interesting Book but- Worst Narrator Ever

Why are we fighting a war in Afghanistan? Hint: it has to do with Russia.

Listen to this book to hear some of the most hilarious French pronunciations ever. Difficult to even follow the gist of the narration. Get Legacy of Ashes instead- it's awesome.

This is a tidy examination of Afghanistan with particular emphasis on 1) its history from the 1970’s through 2000’s and 2) the U.S. led war and counter insurgency efforts post-9/11. The book is critical of what might be characterized as waning US commitment once the Taliban had been displaced and the Iraq war commenced but the author’s arguments are rational rather than ideological which imparts a certain gravitas. Having been written in 2009 the book is somewhat dated but still resonant with the benefit of the intervening years affording the listener hindsight and a greater opportunity to form their own conclusions. In the end, this audiobook is a good overview of the perils of foreign adventurism in Afghanistan.

Kinda heard everything before

Not a lot of new info and stops in 2009, the war continued on for another 9 years at the time of this writing. It’s a great read if you only have a small amount of info about Afghanistan/Taliban.

The author provided good information throughout the book about the Afghanistan overall perspective from 2001 to 2008 with brief overall history of the region. Points were made throughout several chapters and sometimes I felt that I had already heard the same information in earlier chapters.

Yes. In The Graveyard of Empires provides some thought provoking analysis on why the war the Afghanistan is so difficult and provides some solutions.

Have you listened to any of William Hughes’s other performances before? How does this one compare?

With Seth Jones' understanding of Afghanistan, I thought his analysis was excellent but his solution was weak. He is right about the lack of forces to take, hold and build infrastructure throughout Afghanistan. He is right about the US's distraction in Iraq which impacted Afghanistan. His solution is to put more pressure on Pakistan, create local defense forces using Afghani citizens and provide heavy assistance from the Afghan army and/or coalition forces when necessary. Security is vital to establishing a nation. I find his solution intriguing but incomplete. He also spent some time comparing different policies for defeating insurgent forces. Most insurgent forces in history have been defeated by law enforcement action as he states but the insurgents have grievances against their own government. Insurgents against an occupying army is more complex. Law enforcement actions would not work against the Taliban because the Afghanis are not loyal to the national government. They are loyal to whoever provides them with security.