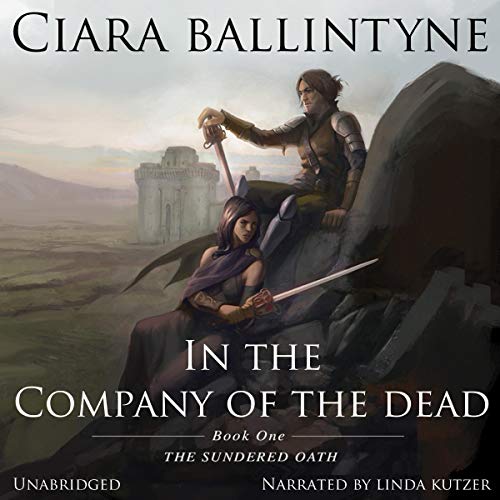 By: Ciara Ballintyne
Narrated by: Linda Kutzer
Try for $0.00

Only a fool crosses a god, but Ellaeva and Lyram will do anything to get what they want.

Chosen as a five-year-old orphan to be the Left Hand of Death, Ellaeva has nothing to call her own - nothing except a desire to avenge her murdered parents. Her duties leave her no time to pursue the man responsible, until both her work, and revenge lead to the same place - the lonely castle where Lyram Aharris is serving out his exile for striking his prince.

Lyram is the son of a duke and third in line for the throne. Hell bent on drowning his grief for his murdered wife in a whiskey bottle, Lyram is ill-equipped to deal with the arrival of a mysterious army. When the castle comes under siege, he believes his prince is behind it, only to have his fears dismissed as the paranoia of a grief-stricken drunkard by those closest to him. He dare not even voice aloud his suspicions of the prince’s involvement in his wife’s murder.

Ellaeva’s arrival brings hope, until she reveals she has not come for the siege, but instead she hunts the castle for a hidden necromancer dedicated to the dark god of decay - a necromancer with a personal interest in using Lyram for his own nefarious purposes.

As the siege lengthens, and with the identity of the necromancer unknown, Lyram finds his faith in those closest to him undermined by treachery and sabotage. Not knowing who he can trust, he turns to the one person whose honesty is unimpeachable - the Left Hand of Death herself.

Caught up in their pursuit of vengeance, and desperately trying to save themselves from both political machinations and clashing gods, Ellaeva and Lyram must fight to save themselves from political machinations and clashing gods. But as the siege lengthens, the greatest threat comes from an unexpected quarter.

What listeners say about In the Company of the Dead

Ellaeva is a supernaturally powerful Battle Priestess for Ahura. She dreams of the day she can mete out justice for her parent's killer, a Rahmyrrin Priest who serves the god of decay. She dares not seek revenge as she serves Ahura, the goddess of death, justice, and truth, but not revenge. Defiance could instantly end her life. But... Ellaeva finds a way. She sees an opportunity to serve her goddess and possibly deal with her parent's killer. She learns there is a plot to kill Commander Lyram Aharris. He is a war hero who brought an end to their country's centuries-long conflict, when only 27 years old. He is also his own enemy at times as he drowns himself in drink most days, trying to endure the pain of losing his precious wife. He is haunted by the memory of finding her dead, face down in the snow with an arrow in her back. In a state of rage, he struck his prince, who he suspected was involved, which was the cause of his exile. Ellaeva has reason to believe that one of the parties involved in this plot to kill Lyram is the same Rahmyrrin Priest who killed her parents. She arrives at the castle Lyram Aharris is in, only to find it is under siege. So her ward is in danger from without the castle, from unscrupulous political traitors with a hired mercenary army, and from within, a Rahmyrrin Priest with supernatural powers. This story has many intricate layers of intrigue with horrifying political back-stabbing, literally. Ellaeva and Lyram both suffered from excruciatingly painful loss and when they come together to fight for justice and fight to survive, it is explosive and riveting. Linda Kutzer's voice is hypnotic. Some people complained about it, which surprised me. She is an excellent voice actor with a skill for using pauses and accents that help communicate each individual's character and personality. I received a copy of this book in exchange for an honest review.

so far the story has been great but I may not be able to finish this audio due to the narrator. she has such a bad lisp it is almost impossible to understand her. this is a prime example of a good story being ruined by someone that should never have been a narrator my advice buy the book and pass on the auido

I thought this was a pretty good book and I am a fan! Ciara Ballintyne creates some wonderful characters with intriguing personalities. The story lines and character arc’s, though just beginning, are well defined and on their way to a great series. What I found most absorbing was Ellaeva and Lyram’s rocky, yet emotional transformations throughout the book. Although this book was set in a singular location, the world building has started to set up what will surely be a great series. Although the book is great, sometimes the narration is a bit hard to follow. With that said, don’t let the narration distract you from what is a truly good listen. Even though this book was given to me for free at my request and I provided this voluntary review and I anxiously await the next installment in this series.

would recommend a new narrator

I was given this free review copy audio book at my request and have voluntarily left this review. I struggled a bit with this book. I had a hard time getting into it. The story seems really slow. I think a large part of this was due to the narrator. The audio quality is not the best. There is a bit of an echo quality to it. It wasn't so bad I couldn't listen, but it was noticable. The biggest thing I struggled with was the slow cadence the narrator has to her speach. It just made things drag and kept me from being fully engaged in the story. I eventually increased the playback speed to 1.5X and that helped a little. The story is actually rather good. I think if there was a more dynamic narrator this would have been a MUCH better experience.

not my favorite, it had some charming parts but overall I felt the story and the narration for both very slow.

Only a fool crosses a god

A very very good book. I liked it a lot, it was written very in a interesting way. the narrator was nice and over all it was a great book. I was given this free review copy audiobook at my request and have voluntarily left this review

I loved this book! It was so detailed and so well written. I can't wait to listen to the next 2 in the series. The narrator is awesome. She differentiates between characters very well and has a lovely tone to her voice. She was very clear and nice to listen to. The story was intriguing and started slowly to a nicely paced build-up. It was a much longer audio-book than I am used to listening to but that was in fact a good thing since I was very engrossed in the story. Thumbs UP! I was given this audiobook for free at my request and have voluntarily left this review.