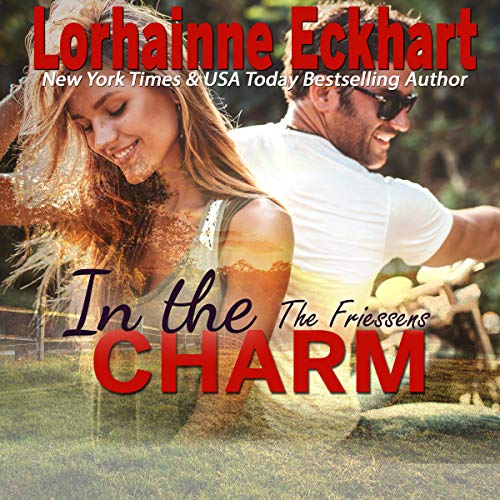 Join a brand new generation of Friessens in New York Times and USA Today best-selling author Lorhainne Eckhart’s Friessen Family series. In the latest volume, Chris is used to having whatever he wants - but this time, the irresistible could come at a high price.

When stubbornly independent Chris Friessen decides to pack up and travel the country on the back of his Harley, he doesn’t expect his decision to see the “real USA” will cost him in ways he can’t imagine. He soon finds himself facedown on some back road, cuffed by small-town cops. To make matters worse, he’s told to keep moving, but when he meets the incredibly sexy daughter of the sheriff, Chris can’t resist doing exactly the opposite - even after realizing the sheriff’s deputy is head over heels in love with her.

JD is the daughter of a South Dakota small-town sheriff, teased by locals that if she were ever to consider marrying, she’d have a line of suitors around the block. But she’s not interested, as the only man she’s ever loved up and left, and her father was behind it. When she drives up on her father and his deputy toying with the extremely attractive, redheaded Chris Friessen, she can’t resist tossing him an invitation to dinner, and she never expects he’ll take her up on it.

Now, Chris may find the irresistible JD comes with a lot more than he’s bargained for.

Didn't get a chance to check out all the other audiobooks in the long-running Friessen Family series? Start with the worldwide best-seller The Forgotten Child. This title alone sold more than 500,000 copies worldwide and is now translated into French and German.

Another great book from this author!

As with all of Lorhainne Eckhart's books, I give it 5 stars. Great character development & interesting story. Anxious to see Chris & JD's next chapter.

Jack planned his motorcycle tour of the country, taking back roads to see the small towns and meet the locals, having saved for years to afford it. The last thing he expected was the sound of a siren behind him. He wasn't quite sure what state he was in and knew he wasn't speeding. This wasn't a race for him and taking in everything around him was his goal, not shortening the pleasure of his trip. When the policemen started yelling for him to put his hands up and keep them where they could see them, Jack was caught off guard. Why were they treating him like a criminal?
A great story, fast and completely unexpected in its complexity. I highly recommend it for mature readers. A wonderful choice for a few quiet hours!

A fun story in the Friessen saga.

I've been enjoying listening to several audiobooks by Lorhainne Eckhart recently. Even though I haven't read the Friessens series in order it really hasn't taken away from my enjoyment of the stories at all. This is my first audiobook performed by Teri Clark Linden and I thought she did a great job.

In the Charm is a pretty short book, just perfect for one evening's enjoyment. This story is about Chris Friessen, younger brother to Danny who was featured in In the Stars. You can enjoy In the Charm without having read In the Stars. In the Charm has a bit of an "insta-love" feel to it, which doesn't bother me although I know that it bothers some readers.

Chris is seeing the U.S. on his Harley, wanting to see everything he can before settling down. He's traveling back roads and visiting small town America when he's pulled over by two small town law officers. They take exception to his riding through their town and have him down on the ground when JD (short for Josephine Denise as we eventually find out 😊) comes along and tells her daddy (one of the officers) to let him go.

The story just gets better from there. It's a modern-day version of a shotgun wedding that had me smiling at times and really enjoying myself as I listened to it. I also had to feel a little sorry for Chris and JD and how they ended up together but it all worked out in the end. I'm looking forward to reading Unintended Consequences which is about both Danny and Evie, and Chris and JD.

A review copy of this audiobook was provided to me but my review was voluntary and not influenced by the author.
#HappyEnding #Heartfelt #FemaleProtagonist #tagsgiving #sweepstakes

Chris Friessen is driving through a small town when he is stopped by the law and cuffed for no reason and put on the ground as he is there JD the sheriff"s daughter stops to find out what is going on. When he stops to get something to eat at the diner where she invited him to stop for a free meal they feel a connection. I enjoyed listening to this story as it progressed.