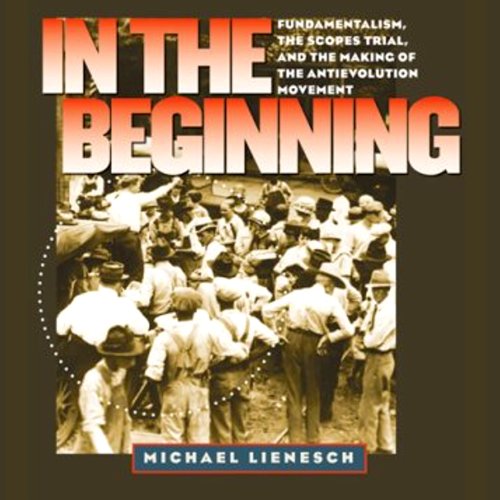 By: Michael Lienesch
Narrated by: John Blythe
Try for $0.00

The current controversy over teaching evolution in the public schools has grabbed front-page headlines and topped news broadcasts all across the United States. In the Beginning investigates the movement that has ignited debate in state legislatures and at school board meetings. Reaching back to the origins of antievolutionism in the 1920s, and continuing to the promotion of intelligent design today, Michael Lienesch skillfully analyzes one of the most formidable political movements of the 20th century.

Applying extensive original sources and social movement theory, Lienesch begins with fundamentalism, describing how early 20th-century fundamentalists worked to form a collective identity, to develop their own institutions, and to turn evolution from an idea into an issue. He traces the emerging antievolution movement through the 1920s, examining debates over Darwinism that took place on college campuses and in state legislatures throughout the country. With fresh insights and analysis, Lienesch retells the story of the 1925 Scopes "monkey" trial and reinterprets its meaning. In tracking the movement from that time to today, he explores the rise of creation science in the 1960s, the alliance with the New Christian Right in the 1980s, and the development of the theory of intelligent design in our own time. He concludes by speculating on its place in the politics of the 21st century. In the Beginning is essential for understanding the past, present, and future debates over the teaching of evolution.

What listeners say about In the Beginning