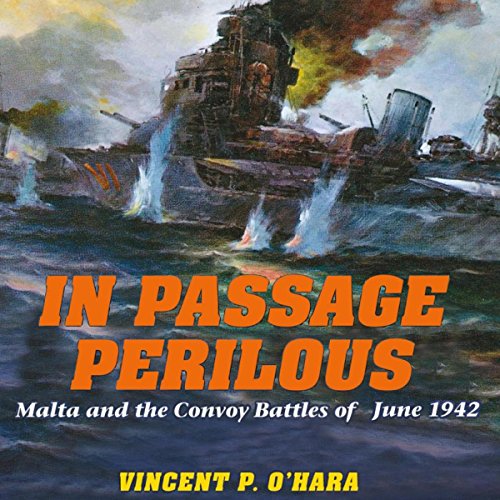 By mid-1942 the Allies were losing the Mediterranean war: Malta was isolated and its civilian population faced starvation. In June 1942 the British Royal Navy made a stupendous effort to break the Axis stranglehold. The British dispatched armed convoys from Gibraltar and Egypt toward Malta. In a complex battle lasting more than a week, Italian and German forces defeated Operation Vigorous, the larger eastern effort, and ravaged the western convoy, Operation Harpoon, in a series of air, submarine, and surface attacks culminating in the Battle of Pantelleria. Just two of 17 merchant ships that set out for Malta reached their destination. In Passage Perilous presents a detailed description of the operations and assesses the actual impact Malta had on the fight to deny supplies to Rommel's army in North Africa. The book's discussion of the battle's operational aspects highlights the complex relationships between air and naval power and the influence of geography on littoral operations.

" In Passage Perilous is carefully researched, objective, balanced and well written. It is likely to become the standard account of the critical phase of the Mediterranean conflict." (H. P. Willmott, author of The Last Century of Sea Power)

What listeners say about In Passage Perilous

A waste of a good credit. The narrator was average but the book was disappointing to say the least. Don't bother.

This is fascinating subject matter and the book was an interesting enough account. Sadly the content of the book was completely overshadowed by the awful narration. James McSorley’s voice sounded very stilted and like it was computer generated. Very disappointing, and not much to recommend.