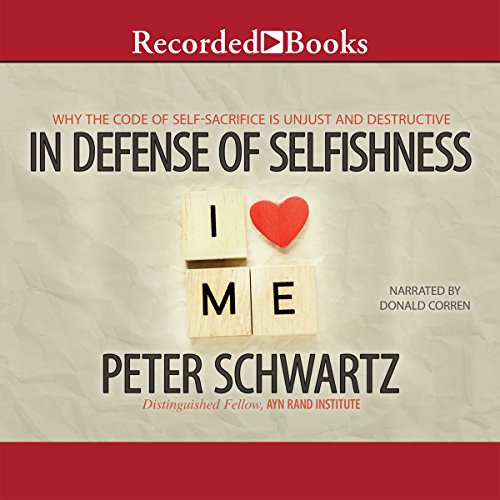 In Defense of Selfishness

By: Peter Schwartz
Narrated by: Donald Corren
Try for $0.00

From childhood we're taught one central, noncontroversial idea about morality: Self-sacrifice is a virtue. It is universally accepted that serving the needs of others rather than our own is the essence of morality. To be ethical - it is believed - is to be altruistic. Questioning this belief is regarded as tantamount to questioning the self-evident. Here, Peter Schwartz questions it.

In Defense of Selfishness refutes widespread misconceptions about the meaning of selfishness and of altruism. Basing his arguments on Ayn Rand's ethics of rational self-interest, Schwartz demonstrates that genuine selfishness is not exemplified by the brutal plundering of an Attila the Hun or the conniving duplicity of a Bernard Madoff. To the contrary such people are acting against their actual long-range interests. The truly selfish individual is committed to moral principles and lives an honest, productive, self-respecting life. He does not feed parasitically off other people. Instead he renounces the unearned and deals with others - in both the material and spiritual realms - by offering value for value, to mutual benefit.

The selfish individual, Schwartz maintains, lives by reason, not force. He lives by production and trade, not by theft and fraud. He disavows the mindlessness of the do-whatever-you-feel-like emotionalist and upholds rationality as his primary virtue. He takes pride in his achievements and does not sacrifice himself to others - nor does he sacrifice others to himself.

According to the code of altruism, however, you must embrace self-sacrifice. You must subordinate yourself to others. Altruism calls not for cooperation and benevolence but for servitude. It demands that you surrender your interests to the needs of others, that you regard serving others as the moral justification of your existence, that you be willing to suffer so a nonyou might benefit.

What listeners say about In Defense of Selfishness

Peter Schwartz sheds new light on a crucial theme much of America has either turned a blind eye to or in the case of our youth, lack exposure to in large enough dose,thereby suffering deficiency in understanding altruism vs morally correct selfishness; each foundational in ones character development. The consequences of altruistic approach in our personal life leaves one morally bankrupt and hurts the core base of what this country stands for. It permits government take over of all things relating to distribution of wealth, services and goods. Selfishness has a bad reputation as it has been painted within our educational system, our churches and our government agencies. This is a blockbuster read for those curious to learn the differences between altruistic and selfish in their radical form and definition. I challenge anyone who reads with a student mind to come away by the end this book unchanged as well as unenlightened.

Excellent clarification of what a proper ethics is based on. Good follow up to Ayn Rand's The Virtue of Selfishness

This book answered all my question!

Would you listen to In Defense of Selfishness again? Why?

After reading all of Ayn Rand's Novels and some of her other works I was left with questions about how to apply her philosophy in my everyday life, this book answered all my questions.

This book is;
1. A guide book on how to live a happy moral life.
2. Garlic to defend against the altruistic vampires
3. Ammunition to help other who wish to live an honest, productive, self-respecting life but don't know how.

This book has the potential to change the world.

Excellent ammunition against the evils of altruism and collectivism that have plagued Man for centuries.

Altruism: How is it hurting you?

Where does In Defense of Selfishness rank among all the audiobooks you’ve listened to so far?

This is among the most important audibles I've listened to.

The author clearly and engagingly explains what "altruism" is and how accepting it as a moral doctrine actually hurts you and those you care about.

Not really. There's enough in it that many of the points made are worth stopping over and pondering.

An important book, it is an easy read with detailed explanations and examples of how altruism is NOT what you might think it is and how you are probably being duped by its "charms."

Logic and critical thinking skills can solve any problem, can show you the path towards tackling any challenge, and can leave you a mindless unhappy grump and burden if you lack it. Drawing clear boundaries in lines of thought, can help you thrive in a world composed of a million chess games. For those struggling with morality, and sensing that “public thought” and promoted culture are maladaptive, can greatly benefit from this book. It provides logical, real examples and new (or refresher) mental models/ tools of seeing the world.

How else to break free from caring what others think besides taking your own thinking - and therefore logic - into your own hands, with the assurance and self respect one deserves? By applying what you have read in this book.

This book was written by a multimillion (billionaire) in the Any Rand Institute. I credit the objectivist ideology with getting me much farther than my peers and improving my life in a myriad of ways. I enjoyed every second of this quick read, and plan on further implementing this principle FULLY! Without deviation into my own life in 2019 and beyond.

I am proud of being selfish, and going forth in the spirit of self respect, mastery, and the pursuit of happiness.

This book may shake your major assumptions abouy religion, politics and even your relationships. a much needed self assessment of ones own values and morality. A must read primary of self interest.

Peter Schwartz crystallizes the basic foundational ideas of objectivism better than anyone else I have read.

As good as I expected

What more can I say? Apparently the review is NOT optional as the app says.