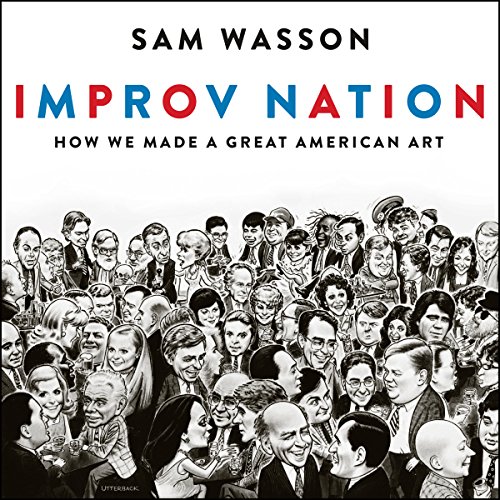 At the height of the McCarthy era, an experimental theater troupe set up shop in a bar near the University of Chicago. Via word-of-mouth, astonished crowds packed the ad-hoc venue to see its unscripted, interactive, consciousness-raising style. From this unlikely seed grew the Second City, the massively influential comedy theater troupe, and its offshoots - the Groundlings, Upright Citizens Brigade, SNL, and a slew of others.

Sam Wasson charts the meteoric rise of improv in this richly reported, scene-driven narrative that, like its subject, moves fast and digs deep. He shows us the chance meeting at a train station between Mike Nichols and Elaine May. We hang out at the after-hours bar Dan Aykroyd opened so that friends like John Belushi, Bill Murray, and Gilda Radner would always have a home. We go behind the scenes of landmark entertainments from The Graduate to Caddyshack, The Forty-Year Old Virgin to The Colbert Report. Along the way, we commune with a host of pioneers - Mike Nichols and Harold Ramis, Dustin Hoffman, Chevy Chase, Steve Carell, Amy Poehler, Alan Arkin, Tina Fey, Judd Apatow, and many more.

With signature verve and nuance, Wasson shows why improv deserves to be considered the great American art form of the last half-century-and the most influential one today.

What listeners say about Improv Nation

Comparing this book to Wasson's Bob Fosse biography may be unfair, as Improv Nation lacks the high concept structure and focus of his previous book. Still, both provide historical overviews of uniquely American modes of performance that have shaped pop culture over the course of a half century. Wasson excels at expanding upon key moments of innovation that shaped comedy rather than providing a laundry list of achievement. He also locates important creative tensions (both interpersonal and internal) to situate the joys and frustrations that have accompanied the evolution and popularity of improv. This is not a book that overwhelms with research and new knowledge, but a well crafted snapshot connecting differing eras and artists. Improv Nation is about the continuum of improv comedy from Nichols and May to the likes of Stephen Colbert and Judd Apatow. It is thoughtful, funny, and well told.

Great performance by David de Vries. His narration handles difficult deliveries of sketch material and characterizations that would have led to a train wreck for most audiobook performers. He handles them with gusto, avoiding both understatement and showy impression.

good, but not comprehensive

Positioned as a canvas of improvisation in America but ignores a lot that happened outside of Chicago, LA, and NYC. Leaves out ComedySportz, Theater Sports, Brave New Workshop, etc. Best for diehard comedy fans who want to learn more about their favorite tv/movie stars, their early days and influences. Still, I recommend it.

The subjects covered are excellently written.

I hope there's a sequel, because while the book is good at covering the Compass/Second City/iO lineage, it completely omits the Keith Johnstone/TheaterSports/ComedySportz branch of the improv family tree. There's more story to tell.

With all the improvisers in the entertainment and audiobook industry, I'd think they could find a reader with a passion for the material. The read doesn't feel like the reader cares about the material, and every time he mispronounced Dave Koechner's name (which was every time he said it), I cringed. Likewise, the one time he said Paul Feig's name, he whiffed it. He even said "Mike" Napier once.