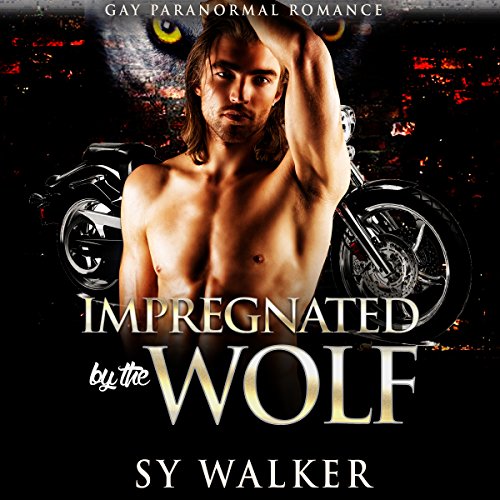 Impregnated by the Wolf

Drew's marriage had ended in shambles. Stuart, his husband of five years, had not only denied him his dream of children, but had added insult to injury by cheating on him. Finding some peace in hiking the mountain ranges that surround his Kentucky home, he encounters his fate in the form of a hunter named Zebe. Throwing caution to the wind, he finds himself in the arms of this hunky alpha male for a hot night of unparalleled passion, but things quickly take a turn for the worse when he encounters the members of Zebe's biker gang and ends up their hostage.

Now, he will quickly learn secrets that he could have never imagined as he finds himself caught between a forbidden love affair with a wolf shifter and those who wish to do them both harm. Can he and his new love survive the wrath of an entire pack of shifters, or will they be torn apart in more ways than one?

What listeners say about Impregnated by the Wolf

If you enjoy shifters, male pregnancy, can suspend your disbelief for an hour, and just want to "relax" with a bit of mindless fluff, this story is for you. The plot is a bit thin, and the dialogue a bit stilted (especially the first couple of minutes), but the writing itself is pretty solid, especially for fantasy escapism. Who doesn't like the idea of finding your happily ever after from a one night stand? Most importantly for me, the love scenes are smoking and the narration provided by David Ross was phenomenal: it really elevated the listening experience. Even in dialogue heavy scenes I was never confused as to who was speaking, and I found myself getting hot under the collar during the smutty scenes. I will definitely be looking for more stories read by him.

Should have known from the title

The narrator was good but the story...not so much. It was stupid and I was cringing a few minutes in. This guy (Drew, I think) knew going into his marriage that his husband didn't want kids but he kept nagging his husband about it (seriously!). The husband didn't want kids cause 2 effeminate gay men can't raise well adjusted kids (what the f****?). Maybe this reasoning was supposed to show the husband had issues? After the husband cheats and they divorce (I'm guessing), Drew meets a guy in the woods and goes home with him. After that the whole thing goes to crap, like seriously out of this world crap! Nothing makes sense and there isn't even an attempt to explain anything. I listen to paranormal shifter/ romance all the time and they can and should make sense and be logical, just like any other story! There was nothing that could redeem the story for me but I don't know, maybe you will like it. Listen at your peril. The narrator, David Ross, was good but there is only so much you can do with a not-so-great story (I'm trying to be nice and not say terrible). But in all fairness, I should have known from the title.

M/M shifters!! W'hoooo!!!! This is an awesome, short, standalone, gay, paranormal romance with no cliffhanger. Totally cool concept. Hey, it's fantasy. How many moms have thought, "If only you knew…" Great story with great narration. In the beginning, Drew got done wrong, but it all worked out in the end ;) Too far? Whatevs. This was fun. I totally enjoyed it. Sweet epilogue. I received this audiobook in exchange for an unbiased review.