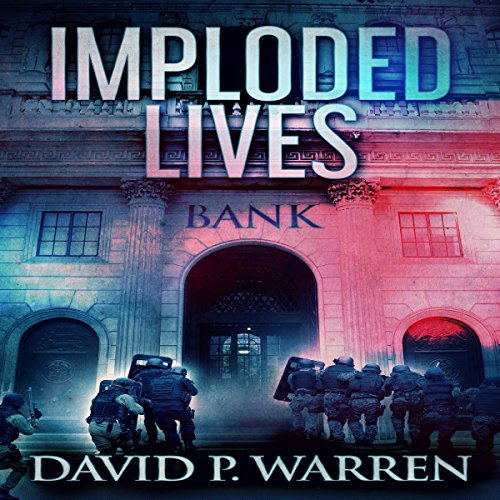 Imploded Lives (The Invisible Robbery and the Hostage Fallout)

Regular people going about their usual lives and business. On a busy day, on the streets of Los Angeles, the lives of the randomly chosen will change forever. All of them are fated to be in the wrong place at the wrong time. All of them will become hostages in one of the most remarkable bank robberies of all time.

Two disguised men calling themselves Mr. Abbott and Mr. Costello and speaking only in electronically altered voices take the bank, and the hostages, in broad daylight. Three police agencies and a SWAT team surround the building, and the media films the bank from all visible angles. Everyone is locked in place, and everyone is watching.

A police negotiator arrives on the scene and engages Mr. Abbott, seeking to assure the safety of the hostages and the nonviolent surrender of the perpetrators. The police command considers all possible moves, and the negotiator takes center stage. After several communications, the hostages slowly walk from the bank and are greeted by the waiting police and paramedics.

As the hostages are interviewed by the police, the building is cleared room by room. No one remains inside. With hundreds of eyes on the building throughout the crisis, both the hostages and almost $700,000 have disappeared - it doesn't seem possible. The perpetrators and the money are simply gone.

The robbery and the media attention exposes secrets that forever change the lives of some of the hostages. The personal trauma for some of them has just begun, as the ripple effects of the robbery and the national media attention it brings turn their worlds upside down and threaten their future lives. LAPD detectives Stacey Gray and Jeff Butler begin an incredible journey to discover how the perpetrators and the money disappeared, leaving no forensic evidence. Who are they? And the tenacious detectives will not give up - no matter what....

What listeners say about Imploded Lives

So enjoyed the listening. The twists and turns caught me off guard, yet the flow of the story had me sitting in the car in front of my office until the end of the chapter. Now wish the book was longer as I thoroughly enjoyed it.

Great read. It kept me on my seat the whole time. Didn't want to put it down. The narrator was also very good.