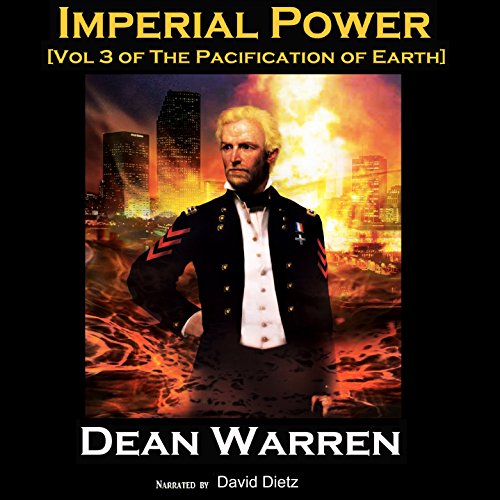 By: Dean Warren
Narrated by: David Dietz
Try for $0.00

This volume is the third and concluding book in the military science fiction trilogy, The Pacification of Earth. It recounts the adventures of a young ex-Marine in unifying the globe and initiating essential population, pollution, and governing reforms. He defeats a Chinese thrust for fertile land via Mongolia, fights off insurrections and attempted assassinations, and finds love.

What listeners say about Imperial Power

A great conclusion to a great series. It was a very exciting story and I enjoyed listening to the audiobooks. The narrator did a great job.

Like all the books in this series, there is a lot of action. The book has a very tense atmosphere, and centers around the idea of forced contraception due to world overpopulation and food shortages. I still didn't like the way women were portrayed in the book, as in the previous books. I had higher hopes for this book because a lot of it takes place in and around Russia, and I love anything to do with the Russian area. I was put off, though, by all the mispronunciations of Russian proper names on the audio version. Granted, I'm picky about that, but it may not bother other people. The plot was a bit predictable, as in the previous books. At the end of the series, I just found that I didn't really care about any of the characters.

This book picks up perhaps a few months after Book 2. Some parts of the Arabic world have joined forces with Europe and North America under the command of Benjamin Bjorn. Now China presents the largest organized threat. But to pacify them, Bjorn will have to contend with betrayal and assassination attempts. Plus, he has that loud ex-wife Jenny and his young son to pacify too.

This book started off promising. We have a very engaging action scene that involves a near fatal plane crash. Luckily for them they had a competent pilot that put them on the ground in almost one piece. Then Bjorn checks out the lady pilot’s feminine attributes. Sigh…. But they have to run off quickly or be captured, tortured, and killed. So no time for flirtations.

Book 2, The Crescent Strikes, had a plethora of dated cultural stereotypes. I am glad to say that the author largely moved away from these and we had more individual character opinions. That was nice to see and let me be a bit more engaged with the plot even with it still being mostly predictable. We also still have a limited number of female characters and mostly they are eye candy and bed warmers. Bjorn’s soon-to-be ex wife Jenny is still a knock out, though she does have a touch more political power in this book. Meanwhile, Bjorn’s new love interest starts off with a career and thoughts of her own and quickly becomes a pretty thing to hang on his arm. Sigh.

Setting all that aside, the issue of contraception comes up often in this book. The world is highly over populated and if the world governments don’t get a hold on it, then the human race may very well be doomed. Still, the methods for national contraception (spraying hormones in the air on a regular basis) were quite ludicrous. A quick web search would turn up some pretty basic info about hormonal contraception, the different types, and what such hormones do to men versus women, the young versus the elderly. There is no one single solution in the world of contraception. There was also this universal pill anyone, male or female, could take to suppress sperm or ova. Again, this quirked my eyebrow in disbelief.

Additionally, Bjorn requires his new girlfriend to take the pill… but the man has yet to get a vasectomy himself. In fact our fearless leader takes no active responsibility when it comes to contraception. So, that made it hard to believe the man was taking the world’s population issue seriously. Bjorn definitely has a blind spot when it comes to this issue and perhaps even a sexist attitude.

Alright, putting my little contraception soap box away. Besides those glaring issues, the pacing of the book does move the reader along at a nice clip. Once again, we have a nice balance of action and contemplation, of politics and sexytimes. There’s still some tension between the Achievers and the Welfies, but we are seeing that more and more folks are seeing eye to eye as they work together. For me, this book was pretty meh but for someone looking for a near-future military fiction without too much depth, this could be fun.

I received this audiobook at no charge from the narrator in exchange for an honest review.

The Narration: David Dietz did another fine job. He had a variety of accents to pull off as well as male & female voices. He did well imbuing the characters with emotion when the story called for it.