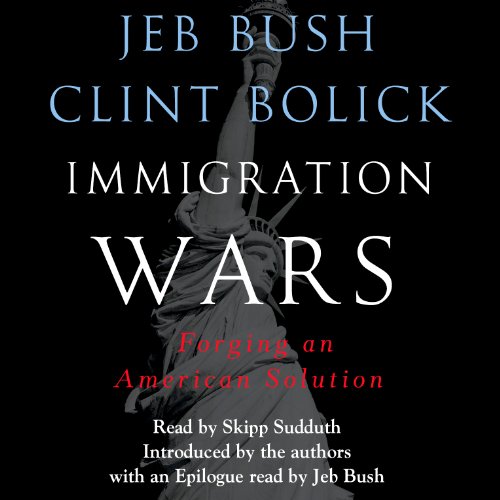 By: Jeb Bush,Clint Bolick
Narrated by: Skipp Sudduth
Try for $0.00

From the former Republican governor of Florida and a leading constitutional litigator comes a timely and provocative look at one of the most divisive issues facing the nation today: immigration.

There's no public policy issue that divides Americans more stridently than immigration. The principal arguments have remained consistent for more than two centuries, without a common ground ever being reached. Now, in Immigration Wars, Jeb Bush and leading constitutional litigator Clint Bolick deliver a comprehensive solution based on two core principles: Immigration is vital to America's future, fueling its growth, vibrancy, and creativity; but any enduring solution must follow America's laws.

We are, of course, a nation of immigrants. More than any other country, our national identity is based on a set of ideals that are enriched and reinvigorated by immigrants, most of whom attach themselves more fervently to core American values. But over the past several decades, a huge percentage of immigrants have entered and remained in the country illegally. In order to effectively deal with this problem, we must first overhaul our badly broken immigration process.

An important and necessary work, Immigration Wars offers a compassionate view of immigration and realistic measures for reforming policy - without the divisive rhetoric - and a roadmap for our country's future.

What listeners say about Immigration Wars

I highly recommend this book. It is a must-read for every American! Very timely and well-done!