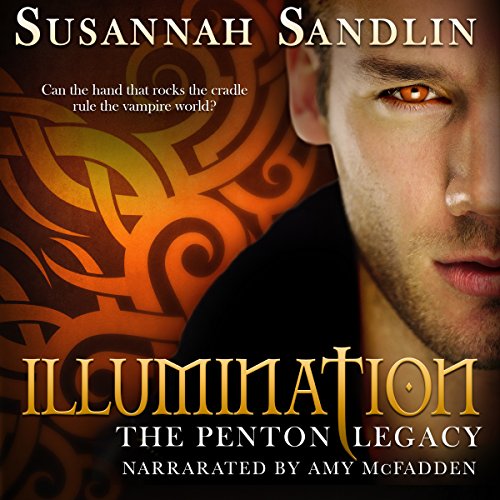 By: Susannah Sandlin
Narrated by: Amy McFadden
Try for $0.00

He came to Penton seeking peace. Nik Dimitrou joined the Army to escape his family legacy, only to have his psychic abilities exploited as a weapon. Now, as a civilian, he turns to the bottle to veil the images that haunt his mind whenever he touches anyone - except vampires. With them, he has finally found a place. But as Penton moves into open warfare with the Vampire Tribunal, Nik finds himself a linchpin in the deepening conflict, not to mention a transformation in his own body more frightening than anything he's faced.

She wanted to change the world. Shay Underwood watched her Peace Corps parents move from one third world country to another until both died following an outbreak of fever. Driven to her own career in tropical medicine, Shay works to cure the disease that killed her parents - until a careless weekend outing draws her into a world far more dangerous than the diseases she studies: a vampire society engaged in human trafficking.

Two cities, two strangers, one world. With Penton rebellion leader Aidan Murphy making risky choices and chief vampire lieutenant Mirren Kincaid forced to take a leadership role for which he is unsuited, it will fall to two outsiders, Nik and Shay, to find a way for Penton - and themselves - to survive in this much-anticipated conclusion to the award-winning Penton Legacy series.

What listeners say about Illumination

Next to my love of Immortal Guardians, by Dianne Duvall, this is my all-time favorite vampire series. I loved the stories and the more that was written about Aidan and his second in command Mirren, the more you liked them. Their battles with Frank Greisser’s Vampire Tribunal and his evil vamps was simply awesome.

The characters: Aiden and Krys, Mirren and Glory, Cage and Robin, Will and Randa, Mark and Melissa, Ashton, Gadget, and all the others, were all phenomenal. Even Greisser and Simon and Jon were bad guys you loved to hate.

Shay was our heroine and she was great. She’d traveled all over the world with her Peace Corps parents, until they died of a fever in one of the countries they traveled to. When Shay grew up she became an epidemiologist, always looking for cures like the fever that took her parents. Then she spent a wild drunken night with Jon and found herself pregnant and then was kidnapped by Jon and Simon and Greisser in order to give birth to “clean” children for feeding the vamps in the future. And the female babies would be breeders as soon as they were old enough.

Shay and Nik didn’t meet again (they were high school sweethearts and hadn’t seen each other for 16 years) until about 50% of the book and, as usual, there was just a single ounce of sexual attraction, and there was semi-graphic sex, which I skipped over. It’s put there because the publisher says “sex sells” so there it is in the book. BUT the storyline is good enough that I can skip the sex and not miss it. And the F-bomb was dropped 73 times.

As to the narration: All I can say is WOW! Amy McFadden did a totally brilliant job. Both the male and female voices were all different and unique to that person. She laughed and cried and whispered and yelled when the book called for it. And her accents were awesome: Southern, New Orleans, German, whatever it was supposed to be. My favorite narration by her.

I’m sad to see this series come to a close. Despite the feeling that this book was rushed, it tied Penton up in a nice neat bow. I love these characters. And I kind of want to do fanfic to see where they go next, in my mind.

Get the whole series

It’s a great series, will try more from this author. They are working towards a cure to reverse the vaccine. Taking down evil vamps, and squeezing in some naughty bits as well.

I love this series but I wish this last book didn’t come years after the last one. The events are so connected that I had to work to recall essential details.

At the end of last book, Aiden and the Penton Legacy residents barely escaped the devastating attack by the ruthless vampire Frank. They are still recovering and trying to rebuild when Frank resurfaced with yet another scheme to aid vampires in subjugating both the supernatural as well as the human citizens of the US.

This time, a new leader Nick Dimitru, emerged to guide when Aiden was still vulnerable. Nick was one of the new hybrids, shifter and vampire, so his strengths are still being figured out.Nick represented Aiden in a meeting and soon was front and center in this renewed fight with Frank.

Frank had begun a program where he was trying to breed super vampires and their first test subject was Shay Underwood who was kidnapped and impregnated. But she was no wilting flower. She was not going to be a willing participant her in this war. She fights back and soon Nick is there for the rescue.

I won’t tell you the rest but this battle was not an easy one. I was hoping the author would do more with Penton and the Omega series (spin-off) but it doesn’t look like it.
Either way, she wrapped up the series with the good guys prevailing.

This book tied up loose ends

But it has a number of mistakes in it she has Will as having been turned at age 19 and in the book Omega he was turned at age 22 there are a few others. The story line was a bit Ify but all in all I will give it 3 stars I just wanted to see what happened to Frank and Finn Patrick.

I found this series by following the artistry of Amy McFadden. A wonderful combination of a talented author and narrator. Enjoy!

loved the book. wished the saga would continue.

loved it. wished the saga would continue. would love to see what happens in penton

Loved all five books. Each one one made me excited to get to the next one. This would be a great movie!

Awesome I NEED MORE IN AUDIBLE I MISSED TH!!!

Exceptional as always every part was as excepted. I loved that it wasn’t like most stories and didn’t make things so predictable or as other’s WE WANT MORE AND MORE IF THE LIFE ON THE VAMPIRE NEIGHBORHOOD PLEASE MAKE MORE I LOVE THE WAY I FEEL IMMERSED INTO THERE WORLD CULTURE AND EVERY DAY MUSINGS PLUS ADEN IS AWESOME SO IS HIS MATE DOC. And all the many others will and robin and now shay and on...

Excellent Narration. Story was well done, kept interest and was not overly graphic. Tendency of repetition, filling in of similar lines from different relationships and books. However, didn't detract from overall story lines.