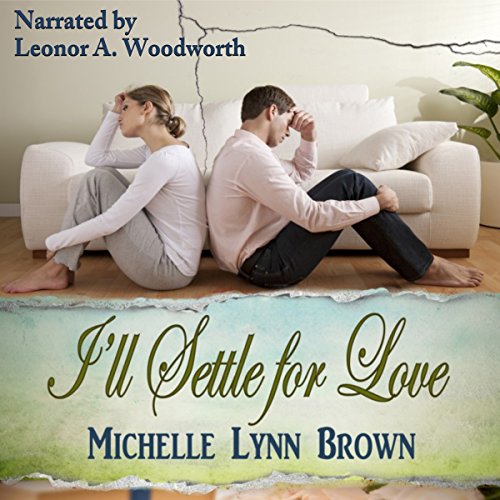 By: Michelle Lynn Brown
Narrated by: Leonor A. Woodworth
Try for $0.00

Leanne grew up under the steady trickle of the harsh and belittling words of her critical mother, in the shadow of her sisters' perfection, and under the weight of a dark secret. With her self-confidence all but eroded, and her head hanging down, she is surprised when Mike McKinley notices her. With every kind word, Mike erases a little pain from her past, and for the first time, she feels as if she is standing on firm ground. But seven years into their marriage, she realizes that her foundation is lying on shallow ground. As their marriage and family begin to settle, the cracks appear.

Mike McKinley is a fixer. From cars to people, he is the guy to go to when you have something that needs repair. But when their oldest daughter is diagnosed with an autism spectrum disorder, he is sent into a tail spin. As his daughter is struggling to stay afloat in her world, and his wife is drowning in her insecurities, Mike feels helpless to do anything to save them.

A wide chasm separates their marriage, and storms threaten to send them crashing through the pit. Can Leanne fight her past, her insecurities and her failing faith to discover the difference between settling for the storm, and striving for the rainbow that comes after?

What listeners say about I'll Settle for Love

This is the third book in this series, but the first I've listened to. A Christian novel of marriage based on undisclosed secrets from the past. The family has problems and the husband feels he has to fix everything. It almost seemed it was a bit judgmental in places. The many ups and downs made my heart hurt. Will they both believe in the power f God's love and let him be in control or will they try to do ït on their own?


The narration was well done. The characters were well portrayed by Leonor A. Woodworth.

I got this book via audiobook boom. This is a powerful love story that shows what God can and will do if we make Him the head of our lives. The fact that marriage takes three God, husband and wife is shown so powerfully in this story. Once both Mike and Leanne realized that there was nothing that could make their lives better except God. The marriage improved and they realized how much they loved each other and their kids. The narrator was very good and moved the story along.

A little all over the place

From the description, I felt that they were going to focus a bit more about their daughter and the fact that they were just discovering that she was on the autism spectrum. I didn't feel that this was the case at all. I feel that Leanne and Mike's marital issues were front and center and to be honest, I just didn't get into the story. It felt disjointed and they tackled a variety of serious subjects, but not too in depth with any of them. I would have liked the author to have focused on maybe one or two and brought a bit more depth to the story.

If you’ve listened to books by Michelle Lynn Brown before, how does this one compare?

Haven't ever listened to any of her books before, so I have nothing to compare it to.

I liked the scene where they were doing the exercise with the backpacks. It made a lot of sense to me and made me reflect on my own marriage and family.

Nope. Listening to the book was enough for me.

The narration was well done and I would listen to another audiobook narrated by Ms. Woodworth again.

I Won't Settle When I Find A Good Book!

A family take on the issue’s of raising a family as well as the struggle’s of marriage and secrets that come left untold. As well as coming to term’s with their relationship with God.
Leanne has faced a life of being belittled and hiding her secrets to make everyone around her happy and she continues this into her relationship with Mike. Mike who is perfect for her, who is a fixer and could fix all of her problems, is he could find a way to open up to him. Seven years of marriage and two children later the foundation of her life is shaken by a number of problems and Leanne and Mike have to discover each other again as well as their relationship with God in order to form a new stable foundation for their family.

Before I can write or discuss anything about this book one major aspect I need to explore is the changes in point of view. Although this was an interesting concept and it allowed me to understand the motives behind people’s actions, especially characters that infuriate me, I was sometimes confused as to who was talking, due to them both being in first person.

I enjoyed being able to understand why Mike reacted the way he did at times, due to not understanding the motives behind emotional male characters at times. As well as enjoying the way it filled in gaps that would appear in single person first person book. Such as the time when Leanne headed to her step-fathers funeral and we faced Mike struggling to understand where she was as well as confronting her for being missing. Yet later flipping back to Leanne’s point of view and experiencing what she had in the hotel room.

A major theme, paired alongside religion that was apparent throughout this book was a focus on mental health and the impact that it can have on a varied mix of individuals. Not only is there a discussion surrounding the topic of Autism but there is an underlying take on physical and emotional abuse.

First the take that Brown takes on Autism and the impact that it not only has on the individual but also important people surrounding said individual was displayed perfectly within this book. Having a close relative with similar, yet less prominent issues associated with autism, I sometimes find books that tackle this topic to be offensive or simply disregarding of the varying issues that can be faced. This was not, however the case with Brown’s work. I found that she used the subject expertly and with complete respect especially considering there was a diagnosis within the book.

The impact that Leanne’s step fathers physical abuse and what could be considered her mothers emotional abuse, is something that is never openly discussed in the book. Yet there are a number of times that Brown alludes to the behaviour that Leanne demonstrates stemming from her struggle during her teenage years. An expert way of demonstrating many of the motive’s behind Leanne’s actions without actually blaming the situation.

Mental health can be a difficult subject to cover within a book adequately without insulting someone, due to the vast and varying opinions surrounding the subject. However Michelle tackles this issue expertly offering not one but multiple point’s of view on two subjects surrounding the umbrella term of mental health.

I am just going to come out and say it, Leanne and Mike bugged me. Mike’s need to constantly fix everything and not take a step back to look at a situation before diving in and Leanne’s unwillingness to open up had me screaming at narrator while driving down the M6. I can completely understand that with some people these type of characters are used to demonstrate development, I simply found them to be annoying. Even as the book was coming to an end I was still screaming at Leanne for jumping to conclusions. This, however, did not make me want to stop reading, and sitting her thinking on the subject now, I actually like Leanne and Mike and think that the result of the whole situation was appeasing, but they still bugged the crap outta me.

Woodworth’s narration of this book was done perfectly; her voice acting was superb and lent itself to an already amazing story. Will definitely be happy to listen to her narrate other stories that I may come across. Her voice’s where distinguishable and believable and I especially loved the voice that was used for Karen. It melted my heart!

I have only ever read two Christian books. One Redeeming Love by Francine Rivers a retelling of the book of Hosea and Kiss’s from Katie by Katie Davis, a true story surrounding a young woman’s walk with Christ and the family she grows along the way. I’ll Settle for Love was once more a completely different read. A Christian romance novel, when I was 15 I never thought I would read anything like that, let alone enjoy it but here I am 6 years later with a big grin on my face as the story of Leanne, Mike and God concludes.

I loved how throughout Brown was always able to keep the spiritual aspect running, and not only did she demonstrate Leanne’s growing love for God but also Mike and his families unwavering love and trust in Him. It was a nice aspect of the book that had me smiling throughout at a number of times and left me not only seeing some of my walk with Christ in Leanne’s but also a number of people from my church featured as the characters in the book. I can’t help but smile when I see them now. Brown was able to create such an in-depth cast that anyone could pick out the Nathan or Mike in their congregation.

I enjoyed how even though Leanne found God within the story, she had to do a lot of soul searching, she had to understand herself that God was there for her and waiting and all she had to do was ‘turn around.’ I like to sometimes link songs with books and while I was reading this book song’s came to me, I found myself in floods of tear’s singing remembering my own walk in finding god. Brown was able to do that to me, and not many author’s can.

This book had me at times getting mad, crying and laughing. All within the same car journey, and I would recommend it to anyone, Christian or not to sit and enjoy this book as I did. I gave it 4/5 stars and will definitely be reading/listening to it again.

I am going to leave you with two things. Go and Listen to Matt Maher’s song Turn around and Joshua 1:9 because it is such a nice verse and Brown demonstrated that brilliantly in her work.

‘“Have I not commanded you? Be strong and of good courage: do not be afraid nor dismayed, for the Lord your God is with you wherever you go”’

“I was voluntarily provided this review copy audiobook at no charge by the author, publisher and/or narrator