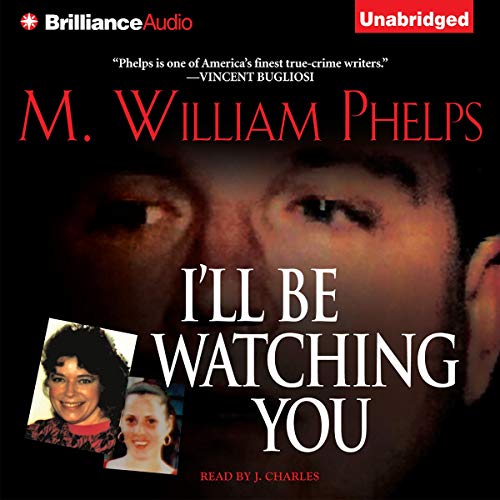 I'll Be Watching You

In 1987 single mother Mary Ellen Renard was strangled, repeatedly stabbed, and left for dead in her New Jersey apartment. Her vicious assailant had already killed once - and would kill again. But unlike the fiend's other victims, Mary Ellen lived to tell the tale.

Clean-cut, popular, and on the fast track at a multinational computer firm, Rutgers grad Edwin "Ned" Snelgrove shocked friends and colleagues with a plea bargain for Renard's brutal attack - and the heinous 1983 murder of college girlfriend Karen Osmun. Vowing never to be caught again, Ned spent his time in prison obsessively studying the violent career of his idol Ted Bundy...then was released 10 years early for good behavior

Unflinching and brilliantly researched, this is an exclusive tour into the twisted mind of an all-American killer and a state attorney's tireless efforts to lock him away forever.

What listeners say about I'll Be Watching You

TRUE CRIME AT ITS BEST

My only fear about the book "I'll Be Watching You", by William Phelps was I might have been fired from my job if any person saw me listening to it while working.

Between Phelps and his reader J. Charles, it was impossible for me to be disappointed. The characters are real. There will be times while listening, you will also have problems taking off your headset.

Ned is a SERIAL KILLER. As I listened to this fantastic Audio Book, my imagination went wild. I actually felt as if I was looking through a window experiencing the entire story.

For me, regardless of any negative reviews from others, "I'll Be Watching You" ranks in my top five True Crime Books I have ever read.
FANTASTIC!!!

I thought this was a very interesting story! True crime at its best! I really like this author, he is in my opinion, one of the best true crime writers and I've listened to several. This book made me sad for the victims of this psychopath and mad that our justice system is so messed up! In the end justice finally prevailed but too bad another life had to be taken first! The narrater was awesome! Best narrater I have ever heard! Can't wait to listen to him again! Thanks J. Charles!!

What would have made I'll Be Watching You better?

I think that the story is good and I personally enjoy true crime stories, however the narration is dull. And kind of monotone. I actually fell asleep listening to this. I had to restart several times. Finally just gave up.

Who would you have cast as narrator instead of J. Charles?

The good and bad

This book was well written and easy to follow the facts. It is a VERY interesting story that was well told. Now for my criticism. I cannot begin to tell you how annoying the “parts” within every chapter were. I listened to the audiobook. Every chapter for some unknowable reason were divided into “parts”. So every couple of pages there was a new “part” within the chapter. Listening to that felt like I was being shocked with a cattle prod every time the narrator said “part one or two or three”. Holy Moly!! Why why do chapters have to have parts? Unfathomable and unnecessary! I love this author’s books but I sure hope I don’t run into another one with this craziness. Please!

Not a good listen

Probably better off reading the book than listening to it. The narrator can't seem to convey the author's words with the correct inflection or establish a mood for the book.

DISAPPOINTING AFTER LISTENING TO "OBSESSED"

I didn't like this book nearly as much as "Obsessed". Again, I had issues with the flippant cavałier tone of the narrator. Murder is serious business, yet J. Charles reads like this is a Dr. Suess book! The story is about a serial sexual killer more diabolical and frightening than his "mentor" Ted Bundy, but the narrator never gives the listener any sense of dread or fear. I got the impression that this was some kind of humorous fiction account, not an actual true crime. As a family member of a victim of a senseless and still unsolved murder, I can tell you first hand that the loss of a loved one is no laughing matter. However, in his defense, Charles is just reading what author Phelps wrote.

Not only is the killer unlikeable but I found Phelps' depictions of the victims and their surviving members unsympathetic. Even stories about prostitutes as victims are more respectful than these poor women. Who cares if they had a history of failed marriages or if they liked to hang out at neighborhood bars? Why was it necessary to tell that one woman, when faced with the need to house and feed her family, chose state assistance over even THINKING about getting a job? She then promptly moved in some man - all while on the dole of the state of Connecticut, then spent that money on liquor! Still, no one deserves to be butchered and terrorized. I failed to see how all of this non-essential minutiae has anything to do with the fates of the victims.

I so enjoyed "Obsessed" after getting over J. Charles narration and was hoping that this book would be as good. But at 14 hours and 38 minutes, it is yet another book "best served abridged"!