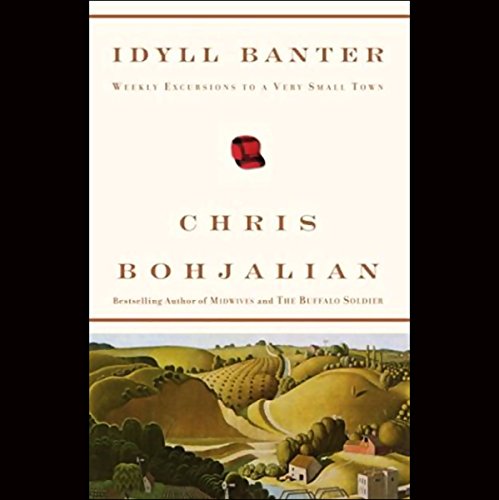 In March 1986, while living in Brooklyn, Chris Bohjalian and his wife were cab-napped on a Saturday night and taken on a forty-five-minute joy ride in which the driver ignored all traffic lights and stop signs. Around midnight he deposited the young couple on a near-deserted street, where police officers were about to storm a crack house. Bohjalian and his wife were told to hit the ground for their own protection. While lying on the pavement, Bohjalian's wife suggested that perhaps it was time to move to New England.

Months later they traded in their co-op in Brooklyn for a century-old Victorian house in Lincoln, Vermont (population 975), and Bohjalian began chronicling life in that town in a wide variety of magazine essays and in his newspaper column, "Idyll Banter."

These pieces, written weekly for twelve years and collected here for the first time, serve as a diary of both this writer's life and how America has been transformed in the last decade. Rich with idiosyncratic universals that come with being a parent, a child, and a spouse, Chris Bohjalian's personal observations are a reflection of our own common experience.

"In this inviting volume of more than 60 pieces from his 12 years of chronicling everyday events from 'the yellow house on the corner of Quaker Street', the transplanted New Yorker celebrates the village's traditions and showers its residents with praise. [He] writes movingly about serious, intimate moments." (Publishers Weekly)
"Bohjalian reads with a gentle, self-deprecating tone....These glimpses of country life are a pleasant diversion for hectic days." (AudioFile)

What listeners say about Idyll Banter

So glad to be able to listen to this!

I'm a big fan of Chris Bohjalian, mostly because of his articles in the Burlington Free Press as I've only listened to one of his books (Buffalo Soldier - also very good). I moved from Vermont to Connecticut 3 years ago, and since then have missed his column. This book is a collection of his columns, all of which show true insight into the Vermont that I know and love. If you want to know what it's like to live in Vermont, listen to or read to one of Chris Bohjalian's books. It's obvious he loves his subject matter, and he does a great job taking you there.

There are better choices

I hoped this would be similar other books of this genre like "It Takes a Village Idiot" or Noel Perrin's series. (Life in a rural setting from an ousider's perspective...) Unfortunately, the writer is a little pretentious and the reader is annoying. I'm not quite sure what it is that is annoying except that there is a little too much inflection or drama in his voice. The text varies between statistic laden lecture to cutesy anecdote.