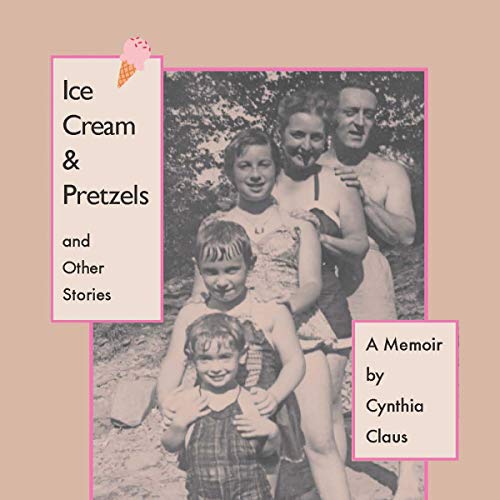 Ice Cream & Pretzels and Other Stories: A Memoir

Ice Cream & Pretzels and Other Stories: A Memoir

In a series of candid vignettes and one poem, Cynthia takes us into her family of origin to revisit her physician parents, whose lives were impacted in unexpected, far-reaching ways by her father’s service in World War II, and into her life with them and her two younger sisters, covering several decades. We meet grandparents, lifelong friends, and mother substitutes. Dark family secrets are revealed. Questions are raised. Other tales explore Cynthia’s work history in such divergent places as her father’s medical office and a seminary. We are with her during the dissolution of two marriages and a nostalgic look back at a high school romance. Always honest, Cynthia tells it like it was - the good, the bad, and the very bad - with feeling and understanding and, eventually, forgiveness.

What listeners say about Ice Cream & Pretzels and Other Stories: A Memoir

I enjoyed listening to Ice Cream and Pretzels by Cynthia Claus. Cynthia grew up in the 50's and 60's in Philadelphia. Her parents were highly educated; her father was a physician as was her mother. They both practiced out of their large house. Cynthia's father was a very respected medical practitioner but was a demanding, domineering and not very loving father to his three children. Her accomplished mother was unable to supersede his authority. Cynthia was expected to assume a great deal of parental responsibility at a very young age and even had to assist her father in his medical practice doing bookkeeping for him. She had to grow up fast to take on these demands. Cynthia was determined not to parent her own children as her parents did.

An Engaging Trip Through Time

Ice Cream and Pretzels is a collection of short stories that transports us on a trip though one woman's growing up years through childhood to today. Cynthia has a clear voice, not just in her narration (I listened on Audible) but also in each story - as I listened, I understood exactly how she felt about each episode in the story. It evoked waves of memory for me too, So many little details brought back to mind similar experiences in my life. Some of the stories repeat aspects she has told the reader before, so don't expect this to read as a novel, Enjoy it for the delightful way Cynthia brings her past to light and the ways she navigated a bittersweet upbringing. I received a promo code for reviewing this book. I would recommend it to anyone, it is an honest look at growing up in a world that is so rapidly disappearing. Worth the read!