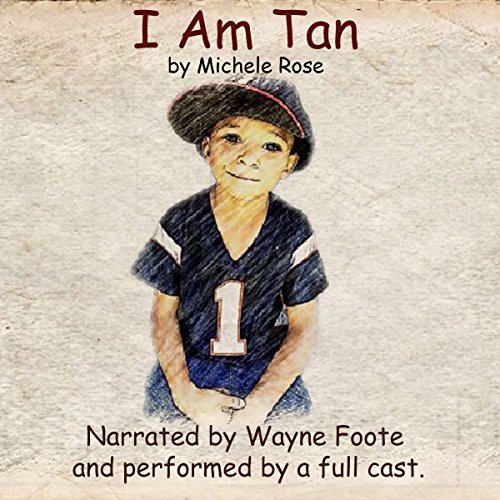 There are white people, black people, brown people, red people, and yellow people, but what about the people who are bi-racial or multi-racial? They may find that they do not fit so neatly into one of these basic colors.

This question of race and color leads one six-year-old boy named Christian on a quest to seek answers. He asks his parents, kids at school, and teachers what color they think he is and what color he should say he is. As the day progresses, he hears stereotypes about race and color, but he also hears valuable information which helps him to embrace all of who he is. By the end of the day, he has learned to think outside of a black-and-white box.

Here in America, it is more likely that people will be described as white or black, versus Caucasian or African American, so color is the audiobook's focus. The main character of this audiobook has a white mommy and a black daddy. The word tan is from the child's own mouth. He came to this conclusion when he was coloring a picture of his family. The brown crayon that he used for his daddy, was too dark for him, and the light peach crayon he used for his mommy, was too light for him; however, the tan crayon was just right!

There are endless possibilities to what a person might be mixed with. The author was only able to add a few of these in this children's audiobook, but she did want to illustrate that there are many tan people throughout the world, who are more than simply black, white, red, yellow, or brown. The other racial mixes included in this story are: Filipino and white; Asian and black; Mexican and black; and white, black, and American Indian. Two famous people are also included! Mr. Obama, who was the 44th president of the United States is half black and half white, and Dwayne "The Rock" Johnson is half black and half Samoan.

This audiobook is written on the level of a small child, and the author hopes that as children grow older, their parents will expand upon this discussion of race, stereotypes, and color.

What listeners say about I Am Tan

What made the experience of listening to I Am Tan the most enjoyable?

I loved the beautiful music playing in the background, it really compliments the story well.

I like that Christopher has so much natural curiosity and is very innocent child.

A scene where Christopher remembers people at the beach getting tan.