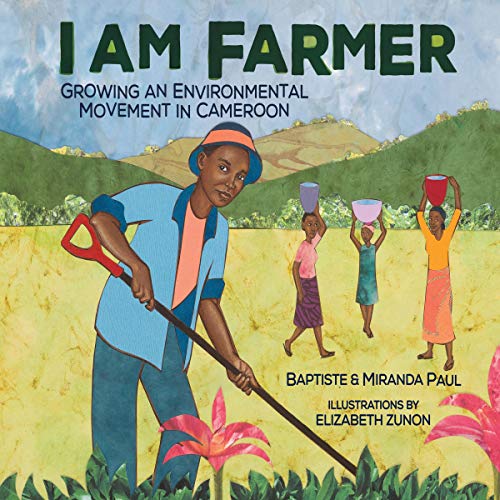 Discover the true story of how environmentalist Farmer Tantoh is transforming the landscape in his home country of Cameroon.

When Tantoh Nforba was a child, his fellow students mocked him for his interest in gardening. Today he's an environmental hero, bringing clean water and bountiful gardens to the central African nation of Cameroon. Authors Miranda Paul and Baptiste Paul share Farmer Tantoh's inspiring story.

"Even as a young child Tantoh Nforba loves the rich soils of his native northwestern Cameroon, earning the nickname 'Farmer' from his mocking classmates; family members discourage him from following his passion in favor of aiming for an office job. Owning the nickname proudly - he even writes it on his school uniform - he rejects their judgment and grows up to become not just a farmer but an effective advocate for clean water and safe agricultural practices. He founds a successful nonprofit organization and contributes to the health and well-being of countless communities across Cameroon ('In the twenty years since he first put on the Farmer shirt, Tantoh has installed or consulted on the building of more than sixty wells or spring catchments and inspired the planting of more than eight hundred home, school, or community gardens'). This heartening story - accompanied in front and back matter by the authors' photographs, maps, and additional commentary about their time with Nforba and his family - conveys the importance of sound agricultural practices across farms, schoolyards, communities, and nations. In Zunon's colorful mixed-media illustrations, the vibrancy of people, water, and especially the contrasting soils of the wet and dry seasons showcase the movement that Farmer Tantoh has built. The back matter also includes a brief glossary/pronunciation guide of Limbum (one of the languages of Cameroon) words." (The Horn Book Magazine)

"As a child, Tantoh asked many questions—too many, according to his teacher. He also loved playing in the dirt and planting things. Fortunately, where his teacher discouraged, his grandmother nurtured his curiosity in the natural world. This nature-loving boy would grow up to be Cameroonian environmentalist Farmer Tantoh, who is credited with bringing fresh water, community gardens, and environmental awareness to hundreds of villages. He does all this with the only resources he has: knowledge and people. The book begins and ends with a poetic description of northwest Cameroon and proceeds to capture the delight of a boy inspired to plant onions, fascinated by the textures of the earth, and keenly aware of the interdependence of people and the planet. When a severe episode of typhoid almost ends his life, Tantoh turns his attention to the most basic of necessities: clean water. Zunon's mixed-media illustrations include collage using traditional fabric designs, photographs, and washes of delicate watercolor. This is a beautiful book about an important topic and the man behind a movement." (Booklist)

What listeners say about I Am Farmer