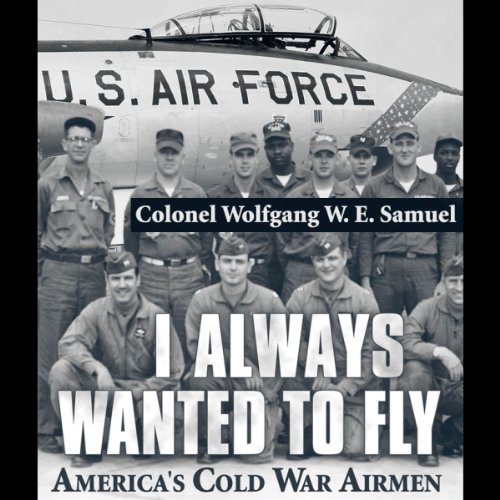 I Always Wanted to Fly

This was the first book to cover all of Cold War air combat in the words of the men who waged it. In I Always Wanted to Fly, retired United States Air Force Colonel Wolfgang W. E. Samuel has gathered first-person memories from heroes of the cockpits and airstrips.

Battling in dogfights when jets were novelties, saving lives in grueling airlifts, or flying covert and dangerous reconnaissance missions deep into Soviet and Chinese airspace, these flyers waged America's longest and most secretively conducted air war.

Many of the pilots Samuel interviewed invoke the same sentiment when asked why they risked their lives in the air - "I always wanted to fly." While young, they were inspired by barnstormers, by World War I fighter legends, by the legendary Charles Lindbergh, and often just by seeing airplanes flying overhead. With the advent of World War II, many of these dreamers found themselves in cockpits soon after high school.

Of those who survived World War II, many chose to continue following their dream, flying the Berlin Airlift, stopping the North Korean army during the "forgotten war" in Korea, and fighting in the Vietnam War.

Told in personal narratives and reminiscences, I Always Wanted to Fly renders views from pilots' seats and flight decks during every air combat flashpoint from 1945 to 1968. Drawn from long exposure to the immense stress of warfare, the stories these warriors share are both heroic and historic. The author, a veteran of many secret reconnaissance missions, evokes individuals and scenes with authority and grace. He provides clear, concise historical context for each airman's memories.

In I Always Wanted to Fly, he has produced both a thrilling and inspirational acknowledgment of personal heroism and a valuable addition to our documentation of the Cold War.

What listeners say about I Always Wanted to Fly

This is a fantastic book that tells the real story from the point of view of the men that flew in the Cold War!

If you are interested in how strategic warfare evolved after WW2, then this book is for you otherwise you will be bored to death

This book consisted of some interesting stories told by pilots of some important, if not really spoken about, missions from the time after WWII until Vietnam. It was my first exposure to any information about what it was like to fly in the Berlin airlift. I was also fascinated to listen to the stories of early EW missions over the Soviet Union. Much of what was done by these brave men, and the sacrifices they made, weren't made public at the time and is still not well known.

It was interesting to hear about what drew people into flying and how they made it to become Air Force pilots. The book is basically just a loose collection of stories, roughly grouped by the time frames the pilots flew. There's no real information or background communicated by the author.

One thing I didn't like was the narrator. He spoke well and clearly. The problem I had was that at times the book would switch from the pilot recounting his story to the author giving adding some information (such as the emotions of the interviewee as they reached a difficult part of their experience). Since 'voice' in the book changed, but the voice reading the book remained the same, these switches were a bit jarring. There wasn't much emotion either. You'd hear a story about a guy trying to bail out of a plane on fire, over enemy territory, with the same tone you'd expect from a guy complaining about how his pen ran out of ink today at work.

Overall though, the book was mostly interesting and the narration was good, if flat. If you're interested in hearing about the less spoken about side of the Air Force during the beginning of the Cold War, I would recommend it.