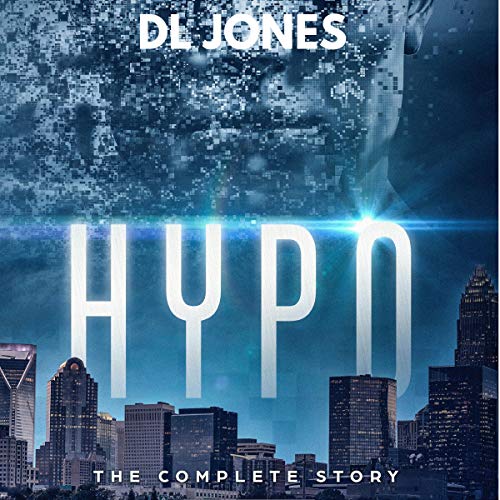 Chauncy and Tre were childhood friends. Tre, who works for a pharmaceutical company, is in town on business. Chauncy hadn’t seen Tre since college and decides they should catch up. After picking Tre up from the airport, they are ambushed and kidnapped. Held hostage in an old, abandoned house. With hopes of escape, Tre and Chauncy use an experimental drug from Tre’s company that gives them extraordinary physical abilities.

After using Hypo, Chauncy finds out there are side effects. Those side effects come into play once he finds out about a secret his wife, Becca, had been keeping from him. Tre shows up to solve the problem, but things aren’t as they would appear.

This audiobook is the complete story of Hypo as released in the serial shorts..."Hypo: Exordium", "Hypo: Appetence", and "Hypo: Apogee". Also included is the original screenplay from where this story was derived.

What listeners say about Hypo: The Complete Story

I liked the idea of the book and the underlying story as well. I had a hard time getting through it, however. At times, there were inconsistencies in the tense which made it difficult for me to immerse myself in the story. In some scenes, it kept switching from past to present tense and I am not sure if it was the way the story was written or the narration that was throwing me off. I had a difficult time following the flow of the reader as well. I played around with the speed of the playback making it faster or slower and could not find a way to make it work. All in all the book didn't jive for me. I may try to read them myself at a later date because I really did like the premise.

For me, this audiobook just didn't get it done.

I do not like saying it, but I believe the narrator was wrong for this book. That took away a lot of the enjoyment that could have been there. Now for the obligatory: "I was given this free review copy audiobook at my request and have voluntarily left this review."

i received this book free of charge for an honest review. the story seemed like it would be ok, and being only 3 hours long i didnt think it could be to bad for a time killer. I couldnt even get more than 15 minutes into it though ihave no idea what the story was because the audio was just to annoying to focus. sounds like it was read by an old computer with an updated voice tone kind of what you would expect from a personal robot in a cheesy future movie. people seem to like it and i wanted to give it a try but i wasnt able to. sorry

A little rough all around but shows promise...2 ½

Hypo: The Complete Story by DL Jones was a bit of a struggle to get through. I wanted to give it higher rating, but it needs to be polished, so going with 2 ½ stars.

What’s the story about? Two friends, Tre and Chauncy, get together after not seeing each other for a while. They begin using an enhancement drug from the company where Tre works. Bad things ensue. Mix in personal life problems. (The book description is pretty accurate, but be aware cheating plays a large focus.)

The good:
The idea and plot regarding the drug were intriguing. The plot twists and turns and I doubt you will see the end coming. There was some character development.

The not so good:
Two things continued to stick out throughout the book; unnecessary and repeat dialogue. It took forty minutes for the story to pick up enough for my personal liking. Need to research the little things (ex. hospital).

The narrator, JA Sterling: Not sure if he was trying too hard, new to this, or something else- whatever it was, it resulted in inconsistencies and rough transitions. There were parts that were done well (the characters) and other parts that were rough (non-characters).

Wondering if because it was initially written as a screenplay the flow isn’t quite right for a book? (Lots of “she said” or “he said” that are not needed due to the voices used by the narrator).

I believe they both have a future in writing and narration, but need to work on the fine tuning. I would be willing to listen/read again as they hone in on their craft.

I found this to be enjoyable and interesting listen. The narration isn't the best I've ever heard, but my standards are pretty high. All things considered, I think he did a decent job. This was an interesting book to me, because it was originally a serialized story. You could kind of tell, with how chapters ended/started, but it wasn't TOO distracting for me. All in all, I liked it and would recommend it to fans of "fringe science" type stories. There is a bit of adult content, so I would not recommend this for younger audiances.

The actual plot could make a great story but it is in desperate need of a good editor. Throughout the story, even within a sentence it hops between present and past-tense words and there is no time travel in this story. There's a lot of bad language and over use of the f-bomb. I was not a fan of the narrators style and felt he often went into monotone speaking. This is not a book I would recommend.

Not just a coincidence

This is the first book I’ve read/listened to by this author. This was an entertaining short listen. The writing style sounds a bit like a sports commentator at times, but overall it was a good book. The publisher’s summary covers things nicely- if I were to elaborate I’d give something away.

This is the first book I’ve listened to by this narrator ( JA Sterling ) and I would try listening to another. His narrating is a bit stilted, but he does well with the different character voices.

There are no explicit sex scenes, excessive violence. There is swearing.

The author DL Jones have done a beautiful job writing his first book.
The story is so alive and the characters are truly believable.
For a short story he have done a perfect job at it.
It’s still hard for me to believe that this is his first book, I couldn’t put it down not even for a moment, I listened to the whole thing, three and a half hours all at once, that’s how good of a job was writing this book, my only wish is that it was longer but sometimes longer could have ruined a book.
All I can say is that the story grabbed me right away and kept its hold on me all the way to the last word !
JA Sterling the narrator also have done his job right on, the first two minutes I believe that there was a problem with the recording but right after those two minutes, perfection.

Absolutely recommended for all.


In exchange for an honest review I’ve received this audiobook.

ready for the sequel!

We thoroughly enjoyed the book!

The action sequences and the storytelling were done quite well. I cannot wait to read the sequel. Enjoyed the character development and the story telling.