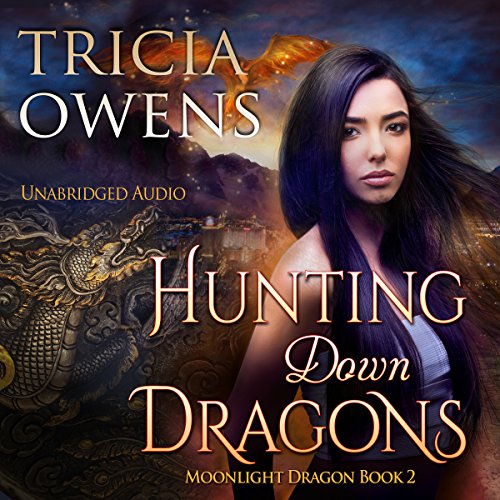 By: Tricia Owens
Narrated by: Jenna Mazzone
Try for $0.00

The Oddsmakers have been overseeing the use of magick in Las Vegas since the city's inception. For a dragon sorceress like Anne Moody, who tries to stay beneath the radar while running her cursed pawn shop, the Oddsmakers are the boogeymen she never wants to meet. They have the power to strip of her of her magick or worse if they deem her a danger to the city.

Unfortunately, the Oddsmakers want her for a mission and Anne can't refuse. However, she has her own agenda: investigating a sorcerer who possesses the power to not only create life, but to raise the dead. With the gargoyle Vale by her side and with the help of her magickal friends, Anne tracks strange creatures beneath the streets of Las Vegas. But when tragedy strikes close to home, Anne realizes she may have to risk the wrath of the Oddsmakers and call upon her dragon for help. Because in the isolated desert, far from the eyes of ordinary humans, she is about to confront her parents' killer. Nothing is going to stop her from finding vengeance.

What listeners say about Hunting Down Dragons

A good story told by a very good narrator.

If you could sum up Hunting Down Dragons in three words, what would they be?

Would you recommend Hunting Down Dragons to your friends? Why or why not?

Yes, if they enjoy shifter/magical stories.

When Ann was walking around in her shop. I wish I could have. It sounds so interesting.

Yes, I almost did.

What did you love best about Hunting Down Dragons?

I enjoyed the blend of friends that Anne has, and her love interest. The world here is full of supernaturals - monkey shifter, gargoyle, fortune teller, wolf shifter water fae, and Anne herself who's dragon blood, and these are just Anne's close friends. Anne is a great person that's also of a diverse nationality. I love the writing of her as she's a normal, regular person as she should be, in a supernatural world. Anne and her dragon familiar are connected. But the connection could draw Anne to be a dragon if she gives to much when using Lucky, which is not a good thing. It's so tempting yet so dangerous that she could lose herself. And she will be watched by he Oddsmakers who rule the supernatural in the city because of her heritage.

*This audiobook was provided by the author, narrator, or publisher at no cost in exchange for an unbiased review at my request.

Jenna is a new narrator to me. I like when she gives a sound to one voice as though spoken into a room that has a large feel to it the distant echo-y voice. This extra really is awesome to get in an audio book. I enjoyed Jenna as she voiced the character's personalities. The audio felt seamless along with the cadence and emotions feeling to flow smoothly as she brought the story to life for us.

I've not read or listened to the first book. I know, that's out of character for me. But I liked the sound of the book and had to give it a go. It's all okay though. It's easy to pick up with the characters, world, and story in this second book without reading the first. The beginning of the book lists out who the characters are to each other and what they are. We learn about the Oddsmakers and even get mention of what happened in the first book as we head into what happens on the Fourth of July in Nevada as Anne and her friends sit watching fireworks in the desert.

There is more to Vale than meets the eye. We start to see this here, but I think there is more to come out and want to learn about him. I want to see Anne with her other friends too. But there is more to the past with her parents and uncle. We learn about what happened to her parents, but there was something else with her mom and what she was searching for at the Oddsmakers demand. Also, Anne's uncle is still missing. I am curious about them all.

I know it sounds like we don't get answers, but we do. I just have a feeling there is more than meets the eye with it all. I look forward to the series as it all unfolds for us and the characters.

Something in the story telling reminds me of Linsey Hall's Urban Fantasy series. If you enjoy one author, you may enjoy the other.

I like the creation of a world with many supernaturals in Las Vegas. There is so much that can happen there and lots of space to happen in. Anne having a potential danger with her dragon heritage. And we get a feel there is more to Vale.

Overall, after writing my thoughts, I've found I really enjoyed the story and want to read/listen to more books with Anne and her friends.

This is the 2nd book in the series by Tricia Owens. It is a fun story that I think is made better by the reading and effects of the narrator.

Ann Moody is a dragon, her boyfriend is a gargoyle, and her best friend is a monkey shifter. These stories are their adventures thru the magical community in Las Vegas.

The story is imaginative and different from other supernatural stories I've read in the past. I really enjoy how there are so many different types of supernatural beings in these stories. Shifters, gargoyles, dragons, leprechauns, witches, warlocks, etc. While there is a romance involved in this book, there aren't very many sex scenes in it, which is a change of pace from most books I read. It's more about the adventure of the story.

I highly recommend this series if you enjoy supernatural books.

A great fantasy book to listen too

I really loved the story and Jenna Mazzone really made it come to life. This is the perfect type of book to listen to. The audio version aloud me to take in the book at a slower pace and enjoy all the details.
Ann Moodie and her friends go on yet another fast-paced adventure, when they take on a rogue necromancer. If you like a strong heroin, action, humor and drama, then this is a book for you