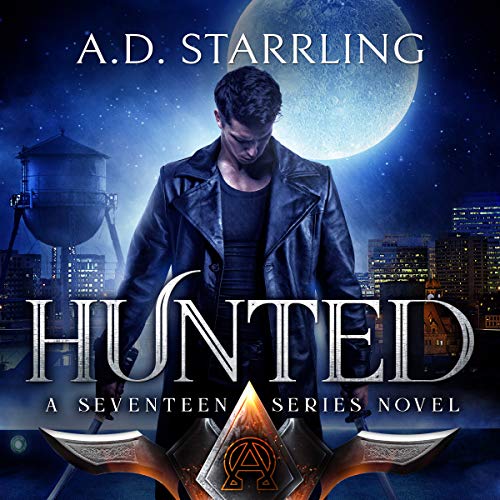 By: AD Starrling
Narrated by: Michael Bower
Try for $0.00

"They call me the half-breed.

The first time they killed me, I was ten.

They've been hunting me all my life.

It's time I stopped running."

Born of a Bastian mother and a Crovir father, a half-breed who is abhorred by the two Immortal races, Lucas Soul spends the first 350 years of his existence being chased and killed by the Hunters.

One fall night in Boston, the Hunt starts again, resulting in Soul's 15th death and triggering a chain of events that sends him on the run with Reid Hasley, a former US Marine and his human business partner. From Paris to Prague, their search for answers leads them deep into the Immortal societies and brings them face-to-face with someone from Soul's past. Shocking secrets are revealed and fresh allies come to the fore as they uncover a new and terrifying threat to both immortals and humans.

To defeat his enemies, Soul must embrace his tortured fate and become the Hunter. But time is running out. Can he protect the ones he loves and prevent another Immortal War before his 17th and final death?

Hunted is the first installment in AD Starrling's best-selling supernatural thriller series, Seventeen. If you like high-octane, fast-paced adventures that combine science and fantasy, then you'll love the world of Seventeen.

What listeners say about Hunted

I wanted to really enjoy this book, but I just couldn't get passed some issues.
Character development was so poor that I really didn't care for any of them.They move me to love them, hate them or hope for or against them.. Just Blahh..
After a few hours I didn't even pay attention to who was speaking half the time. Everything turned into background noise just so I could hear the entire plot..

The narrator did a good job for the male and female lead characters (don't even remember names) but almost ever other character sounded like someone doing a bunch of slightly different Christian Bail Batman voices..
That got old really fast.. I wish it lived up to the idea.

The writing is poor. "Or yet still," "having had." Cool idea, not too cliche. Writer needs to do some prose work. Full stop, if you gave this book a 5 star review you, yes you, are ruining the rating system.

I love the genre but wow, this makes me shy away from these types of books.
I just binge listened to this book while traveling. It was so utterly unremarkable that I can't even recall the name of the protagonist of the story.

I found this story very gripping and great when i had time to pass throughout the day.

While the story showed promise to be the start of an interesting series, it quickly unravelled to be the childish story writing of a character who has everything prepared for them, no great struggle no learning curve, with an ex marine/ cop who can lockpick, the main character just happens to have a katana and be an expert wielder of the swords. There was no difficulty or struggle and no explanation throughout the book why he is hunted other than two rival immortal houses. Who are rivals for no apparent reason. Add into that the car chases and gun fights where logic seems to be out the window while the hero swings his prestigious swords round. Not to mention the incestuous relationship shrugged off as completely normal, the book seemed so childish written and the narrator mispronounced several words throughout the book which is somewhat jarring when you realise what word he says.

I should have enjoyed this but

The plot was too thin and the characters not well defined enough for me to care what happened to them. It’s probably not fair to compare other authors to Jim Butcher but that is how a story could be told. Too often a book is sold as ‘for readers of Jim Butcher’.

Interesting story with loads of fantasy if fifhting guns and swords is your thing you will enjoy it.

was a little slow to start, but ended up loving it. good narrative. next book