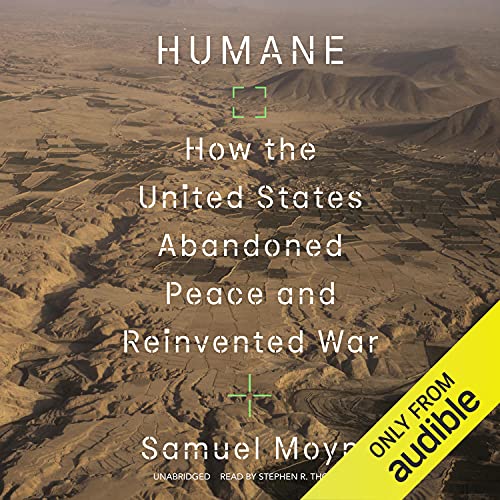 By: Samuel Moyn
Narrated by: Stephen R. Thorne
Try for $0.00

A prominent historian exposes the dark side of making war more humane.

In the years since 9/11, we have entered an age of endless war. With little debate or discussion, the United States carries out military operations around the globe. It hardly matters who’s president or whether liberals or conservatives operate the levers of power. The United States exercises dominion everywhere.

In Humane: How the United States Abandoned Peace and Reinvented War, Samuel Moyn asks a troubling but urgent question: What if efforts to make war more ethical - to ban torture and limit civilian casualties - have only shored up the military enterprise and made it sturdier? Moyn looks back at a century and a half of passionate arguments about the ethics of using force, from the 19th-century struggle to make war less lethal to the eventual shift from opposing the crime of war to opposing war crimes, with fateful consequences.

The ramifications of this shift became apparent in the post-9/11 era. By that time, the US military had embraced the agenda of humane war, driven both by the availability of precision weaponry and the need to protect its image. The battle shifted from the streets to the courtroom, where the tactics of the war on terror were litigated, but its foundational assumptions went without serious challenge. These trends only accelerated during the Obama and Trump presidencies. Even as the two administrations spoke of American power and morality in radically different tones, they ushered in the second decade of the “forever” war.

Humane is the story of how America went off to fight and never came back, and how armed combat was transformed from an imperfect tool for resolving disputes into an integral component of the modern condition. As American wars have become more humane, they have also become endless. This provocative book argues that this development might not represent progress at all.

What listeners say about Humane