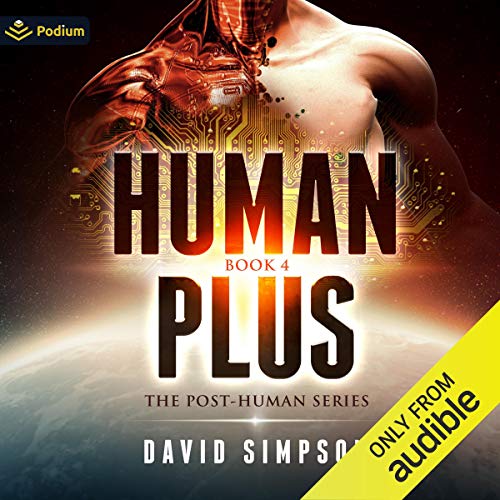 By: David Simpson
Narrated by: Ray Chase
Try for $0.00

The Post-Human Trilogy is done, but the Post-Human series is just heating up! Human Plus is fourth story in the smash hit science fiction series. Not exactly a sequel, not exactly a prequel, Human Plus will defy expectations. No matter what you thought was coming next, you're in for a surprise!

JUST ONE CAUTION: When you're finished, you're going to want to share the surprises with everyone online.... Please don't! Please respect future listeners and let them enjoy the surprises just as much as you did!

What listeners say about Human Plus

Where does Human Plus rank among all the audiobooks you’ve listened to so far?

Human Plus ranks 8.65 - 9.28 out of 10 in my modified rating scale. This audiobook combined a fast paced storyline with sizable slabs of thought provoking techno-cognitive harangues. As an added bonus, the author was gracious enough to include an omnipneumatic sex goddess whose mission in life is to be pounded like a pornstar by the main character as often as possible in order to compensate for feelings of rejection and low self esteem after some brainiac power monger that got his fill and then chucked her. Why didn't Human Plus score higher? Blame James' earth shakingly poor decision regarding his relationship with the above mentioned beauty.

What was one of the most memorable moments of Human Plus?

When James is smacked in the side of his head by a lead pipe named cold hard truth regarding who he is and what he is destined to do.

I have listened to many audiobooks narrated by Ray Chase. This audiobook compares quite favorably. In my opinion, this book is the second best one out of the 4 book series. The first book, Sub-Human I believe, tops it for reasons that you, fair reader, probably do not give a damn about anyways.

Extreme reaction? The closest I came to extreme was when James makes that decision I have already mentioned regarding his relationship with his girlfriend - a healthy, bright eyed eager young woman who pretty much admits to his face that all she wants to be is his own personal nympho. I just stood there shaking my head.

I hope there are more sequels coming. Ray Chase is the perfect fit for this kind of book. He brings a certain something to the books he narrates that I would prefer to listen to him read the book to me rather than sit and read the book. That is the mark of a quality narrator.

Thought I had Simpson figured out. You've been there, too.

You listen or read a series of novels, and you get a basic idea of an inevitable path, of sorts. You expect, you analyze, you feel that you're ahead a few key steps, and then you...

Start with a happy modern world very much like out own, and put the chief architect of its technological future dead center of an astounding conspiracy. A world-wide conspiracy. A world that has very few, if any REAL citizens in it, despite the millions that walk its streets, ride its waves, or drive its highways. And this brilliant man discovers that this isn't the ultimate reveal, not at all. There's a story much darker and deeper, more hideous and surprising than he could ever imagine - A supreme architect, infinitely greater than himself, has crafted this modern paradise, and in doing so, targeted him for a nightmarish purpose far sinister than he can imagine. In this voyage of discovery, a group of rebel outsiders contact him, reveal the truth, and his true role in this larger story.

Sound a little bit familiar? Sure it does. Neo, you must chose the blue pill or the red pill. Which is it?

Neither - This ISN'T the Matrix. There are subtle and VERY glaring differences here, and if you make assumptions at this point, Simpson will surprise you, as he did me. The one real similarity is that there is a much larger world just beneath the rabbit hole, and it just gets better from this point on, and down a path much UNLIKE the Matrix.

If you've come along for the author's ride in his previous novels in this series, strap in. This is a very cool and unexpected departure, and one I enjoyed, as I hope you will.

Use your Audible credit, AKA the the red pill. Stay in wonderland. It's quite a ride.

awesome continuation of the serious

writing this from the audible app on phone so can't go in depth but this book was thoroughly enjoyable. I wish it was longer but isn't that often the case.

If you could sum up Human Plus in three words, what would they be?

What was one of the most memorable moments of Human Plus?

When the A.I. sacrificed himself for humanity.

Ray Chase is fairly consistent in the performance he gives in the 3 books I've listened to.

I laughed and cried throughout. I was very happy to learn that the A.I. hadn't been destroyed, that it had all been a test.

Even though I've read the Kindle edition of the books, I decided to purchase the audio version of the "Post-Human" series. I rarely listen to audiobooks. I'm ADD and it's very easy for me to get distracted from the narration. I didn't have that problem with Ray Chase's narration. His voice was soothing and didn't grate; he was very easy to follow.

Book 4 has an excellent twist that I didn't guess. I can't wait to read the next book!!

I thoroughly enjoyed this book...

Ray is amazing, as always. Thank you, Ray, not only for sharing your voice, but for bringing books to life for those of us who lament not being able to read our beloved books with our eyes anymore. Some narrators are cool, because it is like having a friend read to us, and others, like you, make not being able to curl up with a book on own anymore, totally unimportant. I know your voice anywhere, and hearing it always brings on the calm...

For me, this is what I crave from new science fiction. I don't want to spoil a thing, I will just say I so grateful for the chance to be surprised over and over right up until the end. I love that it made both me think and feel...to care and to be amazed.

I listened to the whole book in one night (it's not long, but still...5 hours is quite a bit of time). I was sitting here in Germany on the banks of Lake Constance, with a bonfire, my golden retriever, the stars, and a few glasses of wine...Mr. Simpson, thank you, for being part of a much needed perfect night.

Thie first few books were fun and although they were a stretch in the believability department, this one just took too much effort to get into. I listened to over half before I gave up on it. I'm done with this series. ~JTC~