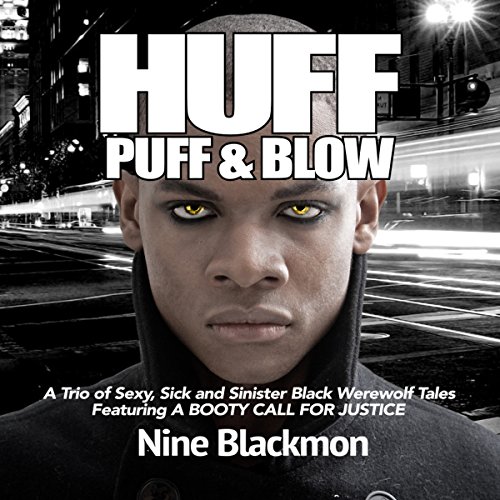 In Huff, Puff & Blow, Nine Blackmon explores the secret lives of a group of Black Chicagoans who also happen to be werewolves. We start with Dr. Baruka Sims, a forensic pathologist who finds herself answering a very sexy brother's booty call to find out why the last three women he was involved with all ended up mauled to death by a killer on the south side of the city. Next, we travel back in time to the 1940s and find a fixer dodging bullets, babes and bloody bodies in an effort to prevent a Black man named Hiawatha from being accused of a murder he didn't commit. Finally, we journey to the 1980s and the throbbing house rhythms of the Chicago gay scene and meet a tortured, misunderstood teen desperate to escape his sexually and physically abusive household to find the father he's never known.

Follow these colorful and diverse characters through underground night clubs, voodoo rituals, passionate trysts and mangled mounds of flesh as they uncover secrets about themselves and the people around them, wolfing out and howling into the Chicago night all the way!

Each of the three stories is well written and stars an interesting cast and the well developed characters offer a refreshing contrast to the typical werewolf story. The narration and the way the story is told in the present tense from the main character's point of view makes it very engaging. It forces the reader to question the characters' views and question just how honest they are with themselves. The performance is a strong point of this title and offers an extra level of emotion to what are already very dark and compelling tales. My only complaint would be the short length and the feeling that these characters' stories are not quite finished.