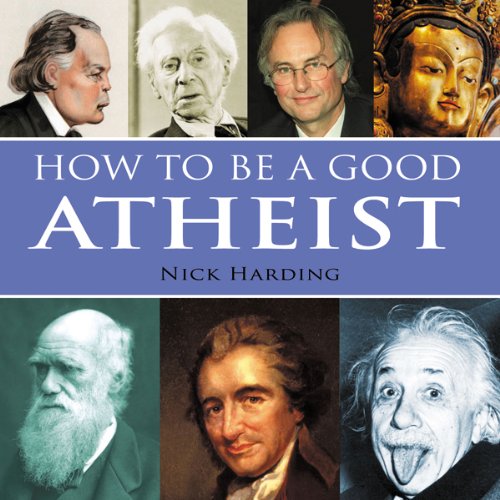 How to be a Good Atheist

By: Nick Harding
Narrated by: Ben Ottridge
Try for $0.00

Join the fastest growing minority there is and become an atheist.

Fed up of religion telling you it has all the answers when it doesn't? Tired of hearing about divine mysteries when there aren't any? Irritated by the pious evangelistas telling you you're going to hell when you're obviously not? Exhausted by creationists...for simply being creationists? Want to know more about the so-called atheist conspiracy? Then this audiobook is for you.

For millennia priests and holy men have told countless conflicting tales about humanity's genesis and fate. Is it all nonsense? You bet it is. For round about the same amount of time they have also been saying that anyone devoid of faith is evil, immoral and responsible for all of society's ills. How wrong they are.This book contains all you need to know about what to pack for your journey on the enlightening road to atheism including a brief history of free thought - it goes back further than you think - all the way to an introductory who's who in purgatory for knowing there isn't a god. Learn that there are five types of atheism. Find out the difference between an atheist and an agnostic - a term invented by T.H.Huxley, famous for his defence of Darwin and how a deist differs from a theist. Discover the oxymoronic fact that Christians were originally called atheists. Read who Lucretius was and what his fellow materialists were about. And revel in the fact that atheists have nothing to defend but are happy that way...

What listeners say about How to be a Good Atheist

Read Dawkins or Harris or Hitchens

There is not much new here. God is Not Good, The end of Faith and The God Delusion are all much better. Its a nice refresher to help remind you that atheists are moral and ethical even though "they" tell us we are not.

A good job for an overview

It's been pointed out on previous comments that there's nothing new in this book. Had it been, indeed, Harding's intention to produce ground-breaking contributions to the religion controversy, it'd be all the reason in the world to call this book unsuccessful. But, at lest to my mind, that's not the case. Rather, I think, the author&#8217;s purpose was to present, in a condensed form, the &#8220;atheist case&#8221;: most effective arguments, history, outstanding figures, etc. And in this, as I said in the title to my comment, I believe Harding achieved his goals, and his book is as good (systematic, compelling, etc.) an introduction to the matter as can be found.
Good points: I found particularly informative the last section (list of principal figures, glossary, further reading).
Weak points: Harding&#8217;s historical views appear too unsystematic to me (Renaissance, for instance, was a far more complex cultural period than the author makes of it). Also, I think it&#8217;s necessary to acknowledge the numerous contributions made by religious people to universal culture, in numberless fields (philosophy and art, for instance, to name but the most noticeable). In this regard, his appreciation that religion has given humanity not much more than &#8220;a couple of crumbling buildings&#8221; in very unjust.

I am humanist and was looking for something that dealt with ethical standards to live by, as the title might suggest. I was disappointed, this book is a overly strident summary of much better and reasoned works from great authors. It seems like an effort to cash in on the freethought movement on the cheap. I would not recommend it for anyone.

Let's practice what we advocate--free and open investigation--read Dawkins, Hitchens, Wright, Armstrong, Pagels, Ehrman and Harris (even try Warren and Coulter!) and make up your own mind.

As an audio book, I felt the reader rushed through the material just to get it completed. There were hardly any pauses or intonations to give the listener emphasis or time to reflect on the ideas. The material itself seemed like a rehashing of other's ideas, and in fact very often told the listener to refer to Dawkins, Hitchens, Dennet etc. I did not enjoy this at all, and couldn't even finish it.

To be, or not to be an Atheist

What did you love best about How to be a Good Atheist?

the conviction that Nick Harding brings.

Not a specific character, but rather the focus on rational thought and truth.

I prefer books that are read by the author

How rational thought can save the world.

I've been an atheist long enough to decide what's worth reading and what's not. Nick Harding has a very dogmatic approach that militant atheists and some readers of Richard Dawkins will appreciate. Some readers criticize Mr. Harding for being so blunt. Frankly, I'm tired of listening to the whining that's coming from agnostics who are still "hell bent" regarding Pascal's Wager in their own lives. If you're like me and you're absolutely certain that religion is repugnant then this book may be for you.

Definitely enjoyed listening about the history of atheism and overall, I'd recommend this title for all who believe and for all who don't!

Very good explanation on an atheism but too much to the left for my taste.
To view your government as God is worse than a believer in God. Self-reliance, when one is responsible for one's own life and lives it as an adult rather than as a parasitic dependent, is one of the most glorious aspects of existence; and finding friendship among one's peers is far more rewarding than with an imaginary friend. All children should strive to give up their imaginary friends and face the world as confident adults, masters of their own lives, without need of psychological crutches.

Take out the references to and quotes from other books and this is little more than a 2 hour riposte to claims made by small-minded dogmatists. Unfortunately all he succeeds in doing is bring himself down to the level of those he is reviling. It puts me in mind of a 17 year old A level student in a debating society proposing the topic 'All religious apologists are brainless idiots - discuss'. There are much better books than this on the subject matter, many of them referred to by the author. Do yourself a favour and choose one of them instead of this.