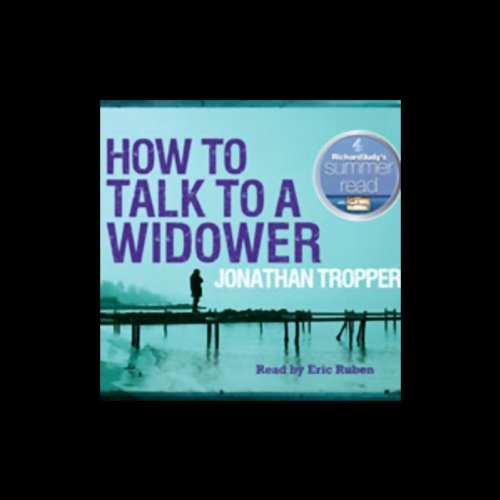 How to Talk to a Widower

By: Jonathan Tropper
Narrated by: Eric Ruben
Try for $0.00

Doug Parker is a widower at age 29, and in his quiet suburban town, that makes him something of a celebrity - the object of sympathy, curiosity, and, in some cases, unbridled desire. But Doug has other things on his mind. First there's his 16-year-old stepson, Russ: a once-sweet kid who now is getting into increasingly serious trouble on a daily basis. Then there are Doug's sisters: his bossy twin, Clair, who's just left her husband and moved in with Doug, determined to rouse him from his grieving stupor, and Debbie, who's engaged to Doug's ex-best friend and manically determined to pull off the perfect wedding at any cost.

Soon Doug's entire nuclear family is in his face. And when he starts dipping his toes into the shark-infested waters of the second-time-around dating scene, it isn't long before his new life is spinning hopelessly out of control, cutting a harrowing and often hilarious swath of sexual missteps and escalating chaos across the suburban landscape.

"Alternately flippant and sad, Tropper's book is a smart comedy of inappropriate behavior at an inopportune time." ( Publishers Weekly)

What listeners say about How to Talk to a Widower

why put women's voices in this soft, pandering, weak time? I love this book, this kinda ruined it for me.