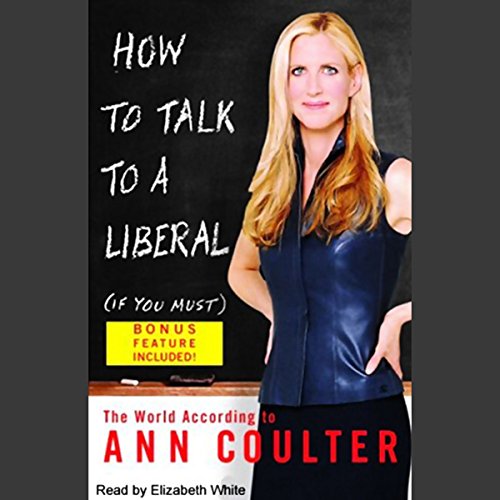 How to Talk to a Liberal (If You Must)

By: Ann Coulter
Narrated by: Elizabeth White
Try for $0.00

Welcome to the world of Ann Coulter. With her monumental best-sellers Treason, Slander, and High Crimes and Misdemeanors, Coulter has become the most recognized and talked-about conservative intellectual in years - and certainly the most controversial.

Now, in How to Talk to a Liberal (If You Must), which is sure to ignite impassioned debate, she offers her most comprehensive analysis of the American political scene to date. With incisive reasoning, refreshing candor, and razor-sharp wit, she reveals just why liberals have got it so wrong.

In this powerful and entertaining book, which draws on her weekly columns, Coulter ranges far and wide. No subject is off-limits, and no comment is left unsaid.

After all, she writes, “Nothing too extreme can be said about liberals because it’s all true.” How to Talk to a Liberal (If You Must) offers Coulter’s unvarnished take on:

In this full-on Coulterpalooza, you’ll find the real, uncensored Ann Coulter. A special concluding chapter even includes the pieces that squeamish editors refused to publish - “what you could have read if you lived in a free country,” says Coulter.

How to Talk to a Liberal (If You Must) is a stunning reminder of why Ann Coulter’s commentary has achieved must-read status.

“A fluent polemicist with a gift for Menckenesque invective...and she can harness such language to subtle, syllogistic argument.” (Washington Post Book World)

Coulter just cracks me up. It's kind of a guilty pleasure though 'cause she spews the venom with such zeal. Though she has her tongue firmly planted in her cheek the truth is there. If you lean leftward you may find her style objectionable. She is entertaining and that is how I approached this work. I wasn't disappointed.

Coulter has a knack for delivering memorable punches and articulating amuzing, bruising ironies. But while there is no end to the number of internal inconsistencies I hear in liberal rhetoric, I have to admit I'm a mostly embarrassed to have Ann as a mouthpiece for modern conservatives. The depth of her reflection seems shallow compared to many other conservative and libertarian pundits - I certainly wouldn't pull out her quotes in serious political conversations with friends. I'd be taken down for hypocrisy in twenty different ways. I wish she could combine her lively style with more authenticity. She seems to be less about factual reporting and careful, synthetic analysis and more about pushing emotional hot-buttons without even establishing a factual ground for doing so. If you really want to talk to a liberal, you need to be able to communicate that you are listening to them and understand them. If you talk to a liberal the way Coulter does, well - you'll have many fewer friends and you'll never really persuade anyone of anything. Persuasion is one of the most important arts of our time. It involves highly skilled communication. Coulter bludgeons this art. So yeah, I chuckle. But I'm deeply disturbed that she's reinforcing the very attitudes and perspectives that make Americans a dysfunctional citizenship with a dysfunctional government.

The Queen of the Right

Her wit is like a new razor. When she writes a book there are more footnotes than any writer that I have read. If you are tired of the Liberal press she is a breath of fresh air.

Ann, you are so good!

The film discussion alone is worth the book price. Yes, when no one is arguing, liberals sound soooo good. But only then. This is one fun book.

Ann Coulter is one of THE MOST talented political humorists around. If, like me, you are an average working Joe, who battles with the challenges of life with honor and as little sniveling as possible.......you will LOVE Ann Coulter! You will laugh until you cry with gratitude that Ann Coulter can so eloquently express the stream of consciousness Right ( with apologies to Jack "Being a Drunk is Really Hep" Kerouac).Both the abridged and unabridged are enthusiastically recommended.

Would be better if narrated by Ann Coulter.

The author makes a lot of interesting points.

Not easy to listen to. It's kind of monotonous.

I only listened to about half of it because of the narration.

It's not for the faint of heart, but you gotta admit: No one turns a phrase quite like Ann Coulter.

She rocks, and this book rocked. (It came out yesterday, and I stayed up most of the night listening to it. note: the other reviews today did not even listen to it!)

My only complaint is that Ann only narrates part of this book. I love her voice, so miss it when the narrator takes over. That said, the narrator is good too.

Very interesting read. Since each article is about 10 - 15 minutes long, I would find myself popping it in to listen to 1 or 2 articles and, a couple hours later, still listening.

Her biting, insightful commentary will have you laughing out loud in the car or wherever you are listening. You have to give it to her, she pulls no punches.

My advice, get the abridged version where Ann reads all the articles.

I like her show and enjoy her columns. I was expecting new material, but instead this book is a collection of her columns. They are (as usual) quite pointed and always fun, especially in hindsight. Still a good listen, just don't expect a bunch of new material.

Fun, but why did Ann not read this one herself?

The book is a fun listen, but I was not happy that unlike her other books, this one is not read by the author. The soundalike reader is ok, but misses some of Ann's wry inflection on certain topics.