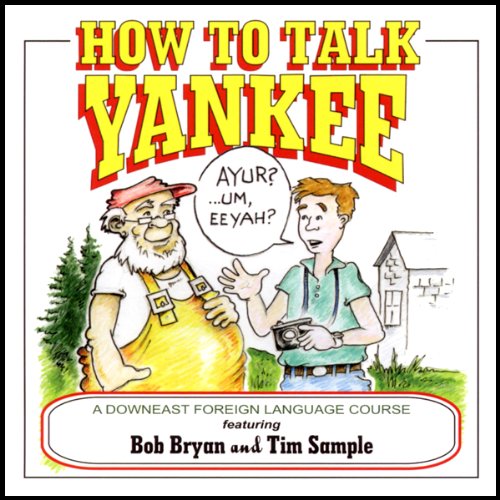 How to Talk Yankee

This is one of the best-selling New England dialectal recordings of all time, in continuous production since it’s release on the Bert and I label in the fall of 1982. According to Tim, this is most likely the album that he and Marshall Dodge would have recorded if not for Dodge’s untimely death a few months earlier.

Following Marshall’s death in a hit-and-run traffic accident in Hawaii in January of 1982, Tim and legendary storyteller and Bert and I co-founder Bob Bryan decided to write and record what they refer to as the first (and only!) "Downeast Foreign Language Record". The idea sprung from a tremendously popular paperback book of the same title by author Gerald Lewis, which Tim had illustrated in the late 70s. Besides being the first collaboration between Sample and Bryan, this was Tim’s first LP for the Bert and I company and his only studio recording of Maine humor. It was "meant to be a parody of the Berlitz-type learn-to-speak-a-foreign-language records popular at the time," says Sample. The idea must have been a good one, because the album was an instant hit. Sample has learned that dozens of ad agencies and casting bureaus have purchased How to talk Yankee and have handed it out as a teaching tool to actors and actresses trying to learn to imitate a true Maine accent!

What listeners say about How to Talk Yankee

Some people might like this kind of stuff, but I only listen for about 8 minutes. Corn-pone humor.