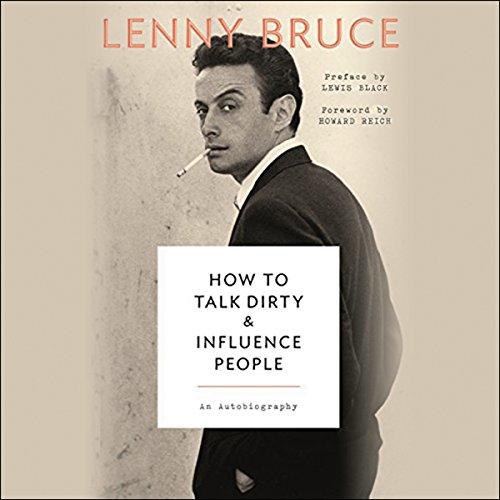 How to Talk Dirty and Influence People

During the course of a career that began in the late 1940s, Lenny Bruce challenged the sanctity of organized religion and other societal and political conventions; he widened the boundaries of free speech. Critic Ralph Gleason said, "So many taboos have been lifted and so many comics have rushed through the doors Lenny opened. He utterly changed the world of comedy". Although Bruce died when he was only 40, his influence on the worlds of comedy, jazz, and satire are incalculable. How to Talk Dirty and Influence People remains a brilliant existential account of his life and the forces that made him the most important and controversial entertainer in history.

What listeners say about How to Talk Dirty and Influence People

Not a book that teaches you how to talk dirty

Leaning how to talk dirty is on the rise. People are discovering that it adds oomph to their love life. You can find books that teach you how to go it well. This is not one of those books. This is a biography.

Appreciating the use of a four letter word

Would you consider the audio edition of How to Talk Dirty and Influence People to be better than the print version?

I enjoyed the honesty and humor that Lenny Bruce portrayed. He went through a lot of trials and somehow through his interpretation, he did it with clarify, humor, and a bit of leveled hope.

This was one book that was on the wishful bookshelf for a long time. I understood Mr. Bruce to be pioneer of comedy. However, I now know him as someone who fought very hard for freedom of speech and ideals. In many ways, He reminds the reader to be very aware of the message he is sending but also delivers to be honest about one's shortcomings and mistakes.

Which character – as performed by Ronnie Marmo – was your favorite?

I found that Mr Bruce had a way of describing the events in his life like catching up with old friend. Better yet, his delivery sometimes came more off as a confession in someone he could trust. Although I know the history of this book to be originally publicized through Playboy, I will still what secrets he has confided in me to myself. :D

I think it would be a stretch to find something wrong about the performance but if there must something: I guess I say that he read Lenny Bruce's song All Alone rather than sing it.

I first saw this when I first saw 'Pump up the Volume'. I wish I had a chance to get to it earlier.

Not so shocking today, b/c he shocked back then

Lenny Bruce died broke of a drug overdose. Before his passing, he changed comedy forever, using it to make trenchant social commentary and defending moral turpitude in the name of "what exactly is wrong with *that* word?" This book is part biography, part social commentary (Soviet Premier Nikita Kruschev is treated better than black American citizens upon his visit to the US), and wraps up with details from Bruce's brushes with the law.

The audio book version of this book is extremely well done, with a narrator that brings a tone of snide irreverence that sounds enough like Bruce to fool my ears.

If you consider yourself liberal, as I do, and yet are mystified with what modern liberalism has become, with an emphasis on the self and the kind of moral uplift that would view Bruce as the spitting image of 4Chan founder Christopher Poole (aka, "Moot") then this book is both timely and timeless. Bruce talked about adult things because he wanted us to be adults. Keep this book out of the reach of children (or better yet, give it to your teenager so you can hear how tame it is by modern standards) and enjoy how deftly Lenny Bruce makes you think about things that most people don't want to consider, simply because the very thought of them is offensive.

Where is the Lenny Bruce of this era?

Before reading his Autobiography, I thought Lenny Bruce was just a stand up comic who got in trouble for using dirty words in his performance.

I had no idea how adept he was as a serious social commentator. He was spot on in his comedy as he revealed the hypocrisy of ‘the establishment.’ As well, he fought like a tiger for the 1st Amendment, which, our current generation of leaders, from both sides, want to trample into Soviet-Like silence.

It is often hard whilst listening that this is not actually Lenny reading his own autobiography. (Which would be hard considering he died 50 years before audible even existed. ) Marmos’ performance is nothing short of outstanding! By far one of the best readings I’ve ever experienced of any of audibles books! And by far one of the best and most laughable autobiographies I’ve read since Bukowski’s Ham on Rye(even though Bukowski claims it to be a piece of fiction anyone familiar with him knows that label only sticks as far as to allow the author a certain bit of wriggle room in espousing on his own exploits and memories without being side-tracked or consumed by specific details).
This book shows exactly why Bruce was far more than a comedian and in some respects not a comedian at all when taking into account not only the sheer gravity of what he accomplished simply by being himself but also proving by example his proclivities as a writer and thinker. I realize he had another writer helping to write the book but I’d imagine that was only for technicalities and to help focus what was ,without a doubt ,a very “frantic mind”!
Bruce was hip but he wasn’t a “Hipster”. He took the stage and made people laugh and think but he was not a “stand-up comic”. He was an author but not a writer. These labels only exist to restrain and Lenny could not and would not be retrained. Bruce also kicked down doors where so many would follow and this book tells that story and shows us how he did so while all the time using words whether spoken or written down to do so.

Gives a good look into both an interesting life and also a good back-door look at the stand up comedian industry.

An entertaining if sometimes challenging listening. Lenny Bruce is as relevant today as ever.

About 50% of this book is interesting.

The other half is rambling and bizarre, hard-to-follow stories.

I found it a decent read but don't quite buy all the hype.

If you are a fan or just interested in post-war history definitely read it. If you are neither then I'd assume you'd be like me and find it just ok.

A really compelling story. Overall I really enjoyed it but after a while Reich's attempt at impersonation becomes annoying. He sounds nothing like Bruce and more like Larry from the Three Stooges.

100% recommend this! I absolutely loved this audiobook! it's incredibly entertaining! So funny! Not only is it narrated as if it were Lenny speaking, but "Lenny" is so animated that the jokes and ancedotes just come to life in audiobook. I honestly don't think it would have been the same reading it. I just keep thinking how relevant so much of what he was talking about back in the 1960s, is today, and it's ludacris that he faced obscenity charges because of his jokes. However without him we wouldn't have so many of the great comedians that we have today. He influenced so many people and left, and will continue to leave, a lasting legacy. This is exactly what I needed :)

Brilliant performance by the narrator

Works really well as an audio book. Gives a great insight into the man and his life.

Not only a legend of the craft of stand up, but the trailblazer.

An honest & insightful listen into the great mans' life.

Exactly why Lenny Bruce is important

Great book for lovers of the history of freedom of speech In America and fans of Lenny Bruce.

Promising start, but loses its way half way through. Last few chapters were a struggle to finish. The performance of the reader is what keeps the book from completely falling apart..
A fan of Lenny, but sadly not the book!!