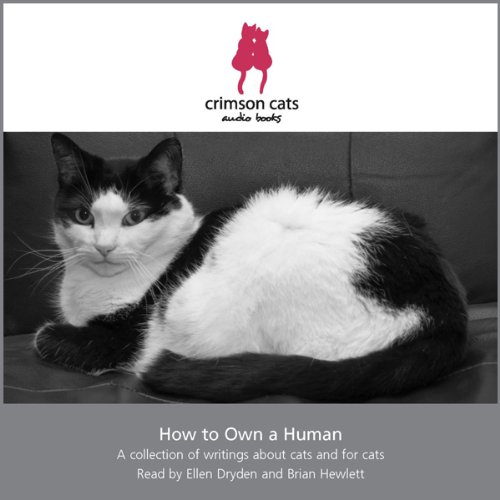 How to Own a Human

How To Own a Human is a selection of writings about cats and for cats. As well as stories and poems, it also includes rhymes, proverbs, fables and quotations, plus instructions for cats on how to train their humans - a sort of "Open Mew-niversity" course for felines.

READERS: Ellen Dryden is an actor, writer and director working mainly for the stage and radio. She read English at Lady Margaret Hall, Oxford and after graduating she won a scholarship to the Royal Academy of Dramatic Art. Her first full-length play ‘Harvest' was staged at the Birmingham Repertory Theatre in 1981 and was subsequently performed at the Ambassador's Theatre in London the following year. Since then she has written many plays for the stage and for BBC Radio. In the 1980s she became involved in running the Chiswick Youth Theatre on a voluntary basis. She is currently Artistic Director of the independent production company, First Writes Radio. Brian Hewlett has worked as a professional actor since 1959 in theatre, TV, film, and audio. His London (West End) appearances have been at The Mermaid, Lyric Hammersmith and Cambridge Theatre where he played Amos Hart in the musical ‘ Chicago'. Touring and repertory work has also included other musical performances, his favourite being the role of Tevye in ‘Fiddler on the Roof'. As well as playing hundreds of roles in BBC Radio Drama, including the notorious Widmerpool in ‘A Dance To The Music Of Time', he is perhaps more widely known as Neil Carter in ‘The Archers'.The Quotations and Proverbs are read by Haydn Wood, the Cats are Michael Bartlett and Dee Palmer and the nursery rhymes are performed by Maddie Byrne (Age 5). MUSIC: The clarinet is played by Terry Needham.

"This recording is perfection for all those subject to the wiles of cats: classic poems and stories about them, anecdotes, rhymes (read by 5-year-old Maddie) and proverbs about cats such as 'After dark, all cats are leopards'. There's also sound advice for cats on how to twist human beings round their soft little paws. 'Always make it look as though the dog did it' is sound advice." (Rachel Redford, The Oldie Magazine)

What listeners say about How to Own a Human

Must Read for CAT people

If you love cats, don't miss this one! You will laugh and you will cry and and you will remember the cats you have loved and have had the honor of being tolerated,acepted, or sometimes even loved by. I will listen to this one again and again and will think of Matilda, Willamina, Chester, Bunyip, Arlene, Albert and all the other furry friends (more than 30) who have shared my life.