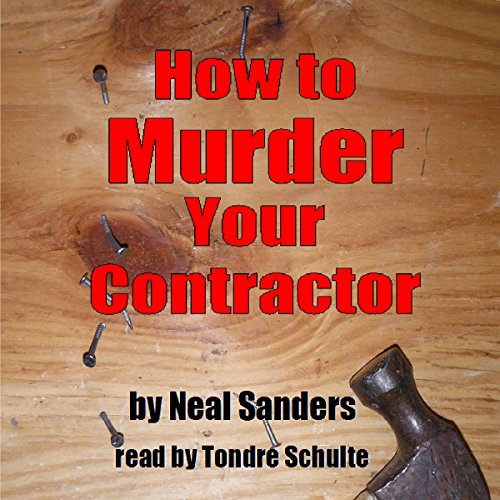 How to Murder Your Contractor

How to Murder Your Contractor

Anne Evans Carlton is a woman with a simple goal: to serve Thanksgiving dinner in the "retirement dream home" she is building with her husband, Matt. All that stands in her way is Joey McCoy: possibly the worst contractor ever to be entrusted with the building of a new house.

How to Murder Your Contractor is a funny, fast-paced story of an epic battle of wits between Anne and Joey. Joey's goal is simple: stretch the job out and keep inventing "up-charges" to inflate his profit. But Joey hasn't planned on Anne's determination or Matt's legal prowess. Neither has he taken into account Anne's unusual circle of friends. They're multi-day Jeopardy winners, master gardeners, and equestrian jumping champions. They bring an arsenal of ideas - many of them deadly - to the task of either getting Joey to do his job right, or to get Joey out of the way once and for all.

Neal Sanders has built his reputation writing books about strong, independent women. Some solve crimes. Some commit crimes. Anne Evans Carlton is a memorable lady - intelligent and strong-willed - and she's surrounded by a group of exceptionally resourceful characters. Neal's books are also wildly funny. As Anne tells her story, her humor comes quickly to the fore. She's a character you'll want as a friend. Neal's books also feature plots twists that deliver surprise endings that delight listeners. How to Murder Your Contractor provides one that only the most careful listener will hear coming.

You may learn a thing or two as Neal's books are thoroughly researched to ensure accuracy. This book will not only tell you how to build a house in Boston's suburbs, you'll learn how to win on Jeopardy and deal with haughty, overbearing home "stagers". You'll also learn about some very novel ways of disposing of a body.