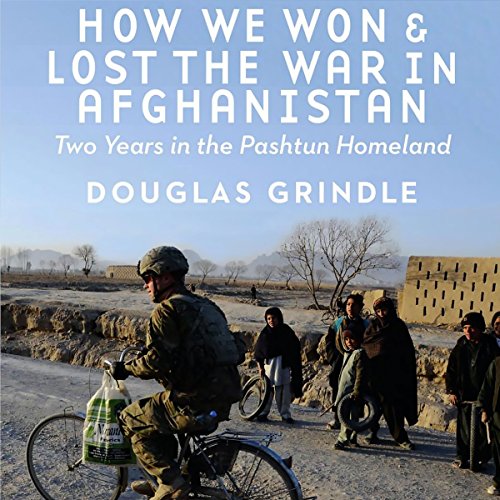 How We Won and Lost the War in Afghanistan

By: Douglas Grindle
Narrated by: Peter Lerman
Try for $0.00

Douglas Grindle provides a firsthand account of how the war in Afghanistan was won in a rural district south of Kandahar City and how the newly created peace slipped away when vital resources failed to materialize and the United States headed for the exit.

By placing the reader at the heart of the American counterinsurgency effort, Grindle reveals little-known incidents, including the failure of expensive aid programs to target local needs, the slow throttling of local government as official funds failed to reach the districts, and the United States’ inexplicable failure to empower the Afghan local officials even after they succeeded in bringing the people onto their side. Grindle presents the side of the hard-working Afghans who won the war and expresses what they really thought of the U.S. military and its decisions. Written by a former field officer for the U.S. Agency for International Development, this story of dashed hopes and missed opportunities details how America’s desire to leave the war behind ultimately overshadowed its desire to sustain victory.

"A well-told story and a must-read for those who want to understand the obstacles to success in Afghanistan." (Publishers Weekly)

“The best book yet to explain what the civilians in Afghanistan at the district level actually were doing and trying to do. Highly readable.” (Ambassador Ronald E. Neumann, author of The Other War: Winning and Losing in Afghanistan)

“Doug Grindle's insightful understanding of the Afghan people and their trials and tribulation make this account a must-read.” (Sam Striker, author of The Humanity of Warfare)

Get Educated on Afghanistan.

If you could sum up How We Won and Lost the War in Afghanistan in three words, what would they be?

Which character – as performed by Peter Lerman – was your favorite?

It was not that type of book.

No You need to get away from it before you come back and try to absorb more information.

Douglas Grindle spent two years in Afghanistan, not as a part of a military force but as a part of the 'nation building' team that came in after. He worked with local leaders to set up programs that would allow for the country to continue to run after the US pulled out, a liaison between those holding the purse strings and those doing the nation building.

Grindle goes into great detail about the activities they undertook, what succeeded and what didn't. And most importantly, why. Some of it is large cultural differences not being understood - US provides support in a way that they expect to work, but Afghanis do things differently - or leadership spending the money don't understand the need - red tape holds up a project so that when funding is released it is the wrong time of year for it to succeed.

Grindle makes it clear that both sides have some part to blame in the failure and collapse. Through his details it is clear to see how it happened, and where things went wrong.

Highly informative, but also engaging. The book is well paced and doesn't get bogged down anywhere. Certainly worth the time to read.

Peter Lerman's narration feels rather robotic for most of the reading. It may be have been partially to do with how it was written, but the sentences all are rather sharp in how they end and flow. Rather than emphasising one sentence over another, as dictated by the flow of the text, each feel like they have the same levels to them. The pauses between are the same. There is no feeling for what the text is saying, just a reading of one work after another.

It took me a while to aclimatise to how he reads, but once I did the issues disappeared and I enjoyed his work. He was clear and easy to understand, just stilted.

This audiobook provides listeners with an interesting and informative firsthand account of the US attempt to "rebuild" the nation of Afghanistan after the US Invasion/War. Written by a former field officer for the US Agency for International Development, the author clearly describes a variety of US policy missteps that ultimately thwarted US long-term objectives in Afghanistan and resulted in billions of wasted US taxpayer dollars.

When policy makers do not have a clear understanding of the needs, objectives and challenges of the people for whom the policies are meant to help, the success of those policies has more to do with dumb luck than good planning. The author shares a large variety of situations in which US agencies implemented policies and made decisions that defied common sense, perplexed and frustrated Afghani locals, and left Afghanis as vulnerable to Taliban influence as they were before the Americans arrived.

Overall, I found this audiobook thought-provoking and interesting.