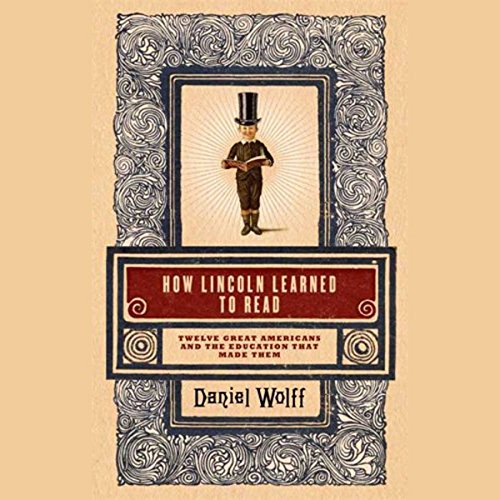 How Lincoln Learned to Read

By: Daniel Wolff
Narrated by: Jack Garrett
Try for $0.00

Here is an engaging, provocative history of American ideas, told through the educations (both in and out of school) of 12 great figures, from Benjamin Franklin to Elvis Presley.

How Lincoln Learned to Read tells the American story from a fresh and unique perspective: how do we learn what we need to know? Beginning with Benjamin Franklin and ending with Elvis Presley, author Daniel Wolff creates a series of intimate, interlocking profiles of notable Americans that track the nations developing notion of what it means to get a good education.

From the stubborn early feminism of Abigail Adams to the miracle of Helen Keller, from the savage childhood of Andrew Jackson to the academic ambitions of W.E.B. Du Bois, a single, fascinating narrative emerges. It connects the illiterate Sojourner Truth to the privileged Jack Kennedy, takes us from Paiute Indians scavenging on western deserts to the birth of Henry Ford's assembly line. And as the book traces the education we value both in and outside the classroom it becomes a history of key American ideas.

In the end, How Lincoln Learned to Read delivers us to today's headlines. Standardized testing, achievement gaps, the very purpose of public education all have their roots in this narrative. Whether you're a parent trying to make sure your child is prepared, a teacher trying to do the best possible job, or a student navigating the educational system, How Lincoln Learned to Read offers a challenge to consider what we need to know and how we learn it. Wide-ranging and meticulously researched, built mostly on primary sources, this is an American story that begins and ends with hope.

What listeners say about How Lincoln Learned to Read

I particularly appreciate the length that Wolff goes to contextualize the era these 12 americans lived in. He covers the social environment as well as the family environment that helped shape these individuals. The dimension that Wolff offers in this book better helps us understand the science of a useful education. It helps the reader to reevaluate our concept of how a useful education is obtained.